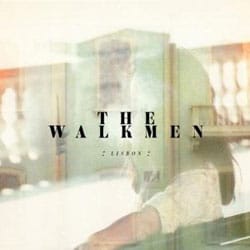 Lisbon, the sixth full-length from The Walkmen, finds our favourite world-weary globetrotters channelling old Sun Records vibes on vintage instruments. And they do it exceptionally well. The Walkmen are one of those bands whose sound could never be successfully aped, whose approach could never be imitated. They make sparse music that’s somehow claustrophobic in its ambience and openness. They tend toward the sombre and the melancholy, but when they allow themselves to explode, they do so in manic fits of calculated intensity.

“I’m stranded and I’m starry eyed,” sings Hamilton Leithauser on the lead single Stranded. Indeed, this is what The Walkmen have always been about. It’s a constant theme in their music, which comes across at times as a patchwork of collected sounds that fit together loosely and threaten to shake themselves apart with worrying. But, this time round, a decade into their careers, The Walkmen have gotten it just exactly right.

On the heels of You & Me, Lisbon sounds very nearly upbeat at times, but that’s another part of the trick. Leithauer’s lyrics are nearly always tales of dejection and near-panic, and they often focus on feeling alone in a strange place. And at times, the music sounds as if it’s drifting through an open Arizona motel-room window (the Acapulco-tinged Stranded), and at others, it’s frenetic and disjointed (Follow The Leader). Even when their music is at its sparest and most aloof – the slap-echo of the distant guitar and the off-kilter jauntiness of the pounding drums just never seem to lock into cohesion – The Walkmen come across as infinitely confident in their approach.

It’s easiest to discuss Lisbon in terms of its imagery. It calls up images of ’50s desert scapes and tumbleweed-thick stretches of Route 66. It’s having sand in your shoes, and a ragged suitcase in the trunk packed with swimsuits and tequila. It’s a night drive in a stolen convertible, rocketing under a concave Nevada starscape, the night wind whipping through your hair. It’s searching for connection in an overpriced world of one-night stands and trust funds. And perhaps most astounding is that the illusion never drops; not to put too fine a point on it, Lisbon is transcendent.

The album opens with the jangly and surprisingly optimistic sounding Juveniles. But Leithauser wails in his trademark mumble-croon: “You’re with someone else tomorrow night. Doesn’t matter to me.” Angela Surf City stands up well alongside vintage Walkmen favourites The Rat and In The New Year. Here, the drums sound at risk of falling over under the weigh of Matt Barrick’s frantic assault.

Blue As Your Blood sounds like the travelling song of a wayward cowboy of questionable repute, and it owes a debt to Johnny Cash‘s Tennessee Three. “Under the shade of a juniper tree, I sing a sad song of you and me,” Leithauser croons over the choogling train rhythm. And as the strings come in: “The sky above is blue as your blood.” Woe Is Me similarly juxtaposes loose, joyous instrumentation with the lover’s lament (“There’s a girl that you should know. She was mine not too long ago”), and the “Woe is me” chorus comes off just as genuine and sincerely hangdog as Buddy Holly‘s “golly gee” ever did.

Lisbon has been compared quite heavily to The National‘s High Violet, another record by a toiling band of New York transplants who’ve finally seemed to find the sound they’ve been searching for. It’s a fair comparison, but it’s a game of comparing Sgt. Pepper to Exile On Main Street. Their incongruence makes neither any less brilliant. So powerful is its imagery, and so timeless is its presentation, Lisbon is sure to join High Violet on any shortlist of the most memorable albums of 2010.