The Wave Pictures – Beer In The Breakers

by Jamie Milton
published: 2 May 2011 in Album Reviews
Tweet 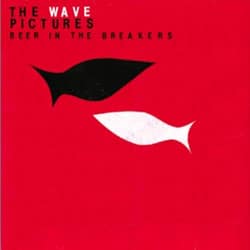 It seemed an odd move to follow-up the infectious, breakthrough Wave Pictures record with the sedated, largely mid-tempo If You Leave It Alone. It was the polar opposite of what made people fall forInstant Coffee Baby in the first place, lacking the raucousness, the rough edges of its predecessor. To some extent, it was a step backwards; sucking out the momentum that had been gathered from the previous album’s positive critical and fan reception.

It’s soothing news to hear that Beer In The Breakers was recorded in a mere day then, because this hints at a re-ignition of what worked so perfectly with The Wave Pictures. Certainly, you’re immersed in the chaotic, all-out renditions of some of the most exciting efforts from David Tattersall and co’s back catalogue to date. The opening couplet of Blue Harbour and in particular, Now Your Smile Comes Over In Your Voice exemplify just how far a stodgy live recording can get you. In similar fashion to White Denim, the sheer energy of the piece is enough to win you over: you feel as if you’re placed right beside Tattersall, inches away from his whimsical tones. It’s an enthralling experience.

More complimentary elements of Instant Coffee Baby crop up in the storytelling, the lyrical playfulness, all crammed together in Two Lemons, One Lime. Although it might be a completely trivial, un-enlightening tale of a woman preferring a white wine over a red, it pinpoints the charm of Tattersall’s songwriting; his readiness to recite idyllic days in the sunshine spent with friends.

A more intriguing anecdote crops up in the album’s title track.It’s a story of homelessness, building a “temporary home” and drinking”beer in the breakers”. “I hope they weren’t alone here,” muses Tattersall, on top of a sparse, drawn-out guitar section.

It seems contrived that the highlights of this record come in the form of slower moments, considering that lack of intensity is the core weakness of 2009’s If You Leave It Alone. Yet it’s the effortless pendulum swing between the breakneck efforts and the more delicate numbers that gives Beer In The Breakers its mandate. Virtually every song is laced with a guitar solo and you can enjoy the gung-ho, piercing solos as much as the elongated, more measured inclusions.

A return to form, then. The Wave Pictures have dozens of records under their belt, so there was never any doubting this. You can’t help but feel however that were this to have followed their 2008 “hit record”, it would have given the band a bigger chance of becoming something of a household name. Not to rack our brains over missed opportunities though; we ought to be grateful that such an almighty effort came around in the first place.