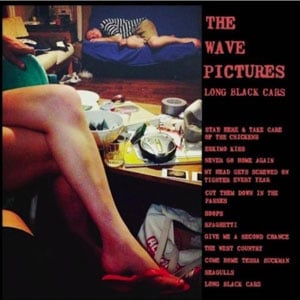 For bands and artists alike, the magic of the debut album is one that is forever hard to replace. The excitement of seeing your collective efforts finally presented as a finished, single entity for the first time is a justifiably special moment that in theory can’t be replicated.

Erstwhile providers of witty, verbose, quasi-skiffle guitar-pop The Wave Pictures appear to have hit upon the perfect solution to the problem of how to keep that magic alive by simply treating each album as a debut in its own right. This approach has seen the scratchy beginnings on first album proper (countless early CD-Rs were recorded and sold at gigs prior to Sophie’s release) give way to the charmingly lo-fi musings of Instant Coffee Baby (an album which many believe the band have yet to emulate), the wispy folky sounds of If You Leave It Behind, the arguably misfiring Sweetheart EP (a feeling exacerbated when listening to continental Europe only full-length expansion Suzan Rode The Cyclone), and last year’s impressive, rich-sounding, Darren Hayman-engineered Beer In The Breakers.

Enter the group’s New York record, Long Black Cars. The band have taken on production duties themselves this time. Hayman, when questioned on his involvement on the last record last year, commented that frontman David Tattersall didn’t need a producer, so clear was he in his mind as to how he wanted the record to evolve. The record’s overall sound is one that, while production allows the three elements – Tattersall’s guitar, Franic Rosinksi’s bass and Jonny Helm’s drums, augmented by occasional harmonica – room to breathe and demonstrate what intricate and effective interplay between instruments, irrespective of their numbers, can add to the record.

For many Wave Pictures fans, the draw continues to be Tattersall’s fascinating, poetic and unique skills as a lyricist. As he croons early on in stomping opening track Stay Here And Take Care Of The Chickens: “The spool is whirring but the tape has come loose, like a rattlesnake snapping at itself.” It’s evident that his skills as a wordsmith are undimmed, and he continues to stake a genuine claim to be one of Britian’s most underrated lyricists. Few people can take an opening line as mundane and unappetising as “The milk bubbled out of the bottle, in clotted lumps of foul cream” and make it work, yet it does when introducing the summery Never Go Home Again.

Elsewhere on the album, the whimsical summer sounds are balanced by sections of the record that could’ve originated Stateside. The mainly instrumental Give Me A Second Chance sounds like a prime slice of Louisiana blues attached to a relentlessly shuffling beat, while Seagulls, with its Duane Eddy aping guitar lines, could be a prime slice of period surf-pop. It also contains another withering Tattersall bridge in “that uniform that you and you and your friends wore embarrassed me more, than anything I’d seen before”.

By the time the infectious title track closes the album it’s clear that the band can realistically claim to have put together their most consistent package of songs since their rightly acclaimed ‘second’ album Instant Coffee Baby. Whereas previous records have felt disjointed – rushed, even – Long Black Cars retains a common sense of cohesive purpose throughout. With the summer fast approaching, Tattersall and co. may well have delivered an early soundtrack ready made for it.