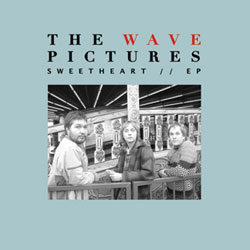 For such a prolific band, The Wave Pictures have managed to keep a surprisingly low profile. They’ve been around for over a decade, and put out five proper releases in the last two years, including a fantastic turn as Stanley Brinks‘ backing band earlier this year. By this time in their career, they’re not likely to be focussed on picking up new fans. Thus, we’ve come to the Sweetheart EP, which provides more of the same from this steadily quirky Loughborough trio.

In this six-song collection, David Tattersall and company continue their DIY tradition of sounding more like the Violent Femmes than the Violent Femmes did. Such is their brand of indie-folk: one moment they’re aspiring to greatness, sounding like bona fide geniuses of modern composition, and the next, well… they sound like they’re just making up chord changes and lyrics on the fly to dismal and embarrassing effect.

Lyrically, Tattersall is still sharp as ever, but between his whispy Gordan Gano via Nico voice and the general pall of the mostly acoustic backdrop – which flails and flops between varying degrees of dullness and manic spasms – the lyrics tend to get lost in the hodgepodge.

Sweetheart is a sleepy campfire ballad that opens much too slowly for the good of the album as a whole. When the band comes in it all comes together to sweet and smiley effect, but the acoustic opening verse feels like an awkward eternity.

The album’s standout track is I Shall Be A Ditchdigger, which rollicks and broods with gypsy gusto.� Here, Tattersall releases a few eyebrow-raising lines over the din: “It helps to have a reason when you’re fondling the breast of the wife of the guy with the knife against your neck.” See also: “Why would Einstein talk to a gorilla? I got a prize from the Sizzler. I put my money down and I went home with your sister.”

Blind Drunk is a surprisingly touching ballad, and it manages to shine and shimmer like motes dancing in a slant of sun, while Cinnamon Baby finds Franic Rozycki’s guitar solos jerking and writhing for entirely too long, aiming perhaps for Jeff Tweedy‘s sloppy greatness over a groove that longs to be Handshake Drugs when it grows up.

On closer American Boom Tattersall sings, “We never gave a shit about whether we were or were not hip. We played in a dust cloud like Pigpen in Peanuts.” Whether or not they give a shit, The Wave Pictures are impossibly hip – so much so that they’re often difficult to listen to. Their music seems ripped from the days of homemade cassette tapes and photocopied zines and mail order seven-inch records. As such, Sweetheart is a welcome continuation of their manic creative process.