The White Stripes – Get Behind Me, Satan 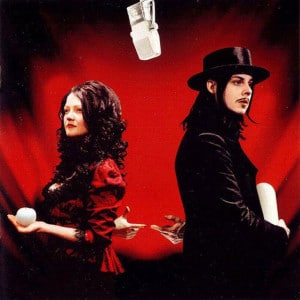 Everything you know is wrong. Thought every White Stripes album was full of raw, visceral blues workouts? Thought Jack White was one of the greatest guitarists of his generation and every track showcased his awe inspiring ability? Well, think again, for Get Behind Me Satan is a very different beast.

Let’s get this straight from the start. A lot of White Stripes fans are going to be hugely puzzled by this follow up to the planet shagging success story that was Elephant. And a fair proportion of those are going to absolutely hate it. For a start, there’s only three tracks based around the guitar, with most songs written for the piano. And secondly, this is the Stripes’ most diverse album yet – they’ve dropped the garage sound and embraced bluegrass, country music and even disco.

To longstanding observers of Jack and Meg though, this shouldn’t come as too much of a surprise. Jack’s work on the Cold Mountain soundtrack and his production for Loretta Lynn had demonstrated his love of bluegrass, and let’s face it, if he’d just produced Elephant Part II he’d have been in danger of disappointing just as many fans as The Strokes did with Room On Fire.

So put aside your disappointment at the lack of squealing guitar solos and take Get Behind Me Satan for what it is – another massive step forward in the evolution of a truly great band. The single Blue Orchid is pretty much unrepresentative of the album, but its vicious guitar riff and Jack’s falsetto give it an addictive feel. It conjures up visions of behemoths of ’70s rock like Deep Purple, but with a whole new spin for the 21st century.

Far more typical of the album is the wonderful disco-influenced My Doorbell, with its juddery piano riff and percussion and Jack half-rapping in a style reminiscent of Beck. It’s totally different to what you’d expect from the Stripes and sounds wonderfully joyous. Even more bizarre is The Nurse, employing chimes and a marimba to create a nice little campfire vibe, before Meg smacks her drumkit as hard as she can to create unsettling bursts of noise between the verses.

The standout track is probably Take Take Take, a tale of a fan’s encounter with Rita Hayworth in a bar which turns sour when Ms Hayworth takes her leave. “She didn’t even care that I was even there/What a horrible feeling” whines Jack’s character in a manner similar to Eminem‘s Stan. The song mixes jangly acoustic guitars with an angular piano riff and when Jack spits out “Take, take, take” over the chorus, the effect is quite sinister.

Elsewhere, Little Ghost is a charming little traditional country ditty, which together with I’m Lonely (But I’m Not That Lonely Yet), show what a huge influence Loretta Lynn is on the band. Fans of Jack’s guitar will also be relieved to hear Instinct Blues, which is the closest thing you’ll hear to Jimi Hendrix coming back down to Earth. Red Rain, a bluesy workout, is another chance to appreciate Jack’s guitar work, but its clear that Jack and Meg are more interested in exploring different styles of music on this album.

The old Stripes motifs are all present and correct as well – the obsession with the number three (all songs were written on three instruments, piano, acoustic guitar and marimba), the colour scheme of red, white and black and the old, long disproved, references to Jack and Meg’s siblinghood – the final track, the wonderful I’m Lonely has the best lyric on the album in “I love my sister, Lord knows how I’ve missed her…I sometimes get jealous of all her little pets, I’m lonely but I ain’t that lonely yet”.

With no low points at all (well, maybe Meg’s, shall we say idiosyncratic, vocal performance on Passive Manipulation), this is another superb album from The White Stripes. Some may bemoan the lack of guitar, but this is obviously the sound of the band evolving and moving on. Satan’s been conclusively put behind them – who knows where they’ll go from here?

The White Stripes MP3s or CDs

The White Stripes on Spotify