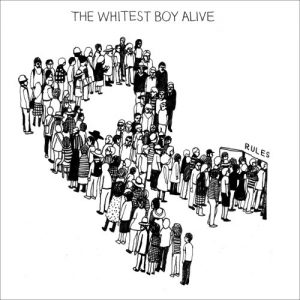 The Whitest Boy Alive‘s name is kind-of-ironic, but also kind-of-not. Frontman (and occasional half of Kings Of Convenience) Erlend Øye might possess the fair complexion you’d expect from a northern European, but the music he makes with The Whitest Boy Alive is funkier, more danceable, and hence less overwhelmingly ‘white’ than you’d expect from a prima facie indie band.

But, on the other hand, The Whitest Boy Alive can’t escape their innate indieness. This is dance music created within the parameters of rock: each track is built upon on a solid guitar-bass-drums foundation, the lyrics are uniformly polite, and only one song here goes beyond the five-minute mark. Listening to their music is a bit like watching a reluctant dancer trying, and failing, to set aside their self-consciousness.

The music on Rules (the follow-up to 2006’s sleeper hit long-player Dreams) is rigid like a Meccano set. Guitar, bass, drums and keyboards share space, but are kept separate and distinct, as if frightened of stepping on each other’s toes. Together, though, the instruments conspire to form pleasant grooves: each and every track here is what the over-fifties might deem a ‘toe-tapper’.

At its best, the music achieves a pleasing coolness, reminiscent of 1980s ‘cocktail pop’ like the much-derided Curiosity Killed The Cat and even Sadé. If you find those comparisons more repellent than alluring, you might dismiss this with the dreaded term ‘coffee table’: background music for stylish social gatherings.

With music as tight and orderly as this, some nimble songwriting is essential to prevent ennui setting in rapidly. Unfortunately, much of Rules isn’t up to the task. There’s nothing here as exciting as Burning from Dreams – still their best track by a million miles. Indeed, there’s nothing here as exciting as most contemporary music. The repetitive grooves become a bit, well, repetitive, and Øye’s unfailingly well-mannered vocals provide almost zero variation.

Courage is probably the album’s best track. Although starting off according to type – tidy-yet-funky guitar, bubbling bass, metronomic drumming – it goes off on a nicely unexpected tangent with some mid-nineties-vintage synth stabs and Øye repeating the titular refrain with something approaching urgency. Elsewhere, Gravity features call-and-response backing vocals – a welcome touch in any song, and especially so in the context of an album as consistent (translation: ‘samey’) as this.

Gravity is also the album’s meatiest track lyrically – it alludes to some emotional turmoil, with Øye accusing a love rival, “You only want to be with her because she’s mine / You will lose me as a friend if you cross that line”. But, generally speaking, the lyrics on Rules are non-descript and unwilling to draw attention to themselves.

Listening to Rules is a surprisingly boring experience. At several instances throughout this album you wish someone would let rip with a guitar solo, fire off a rave horn or just do something to liven up proceedings. Ultimately, then, the band’s name isn’t ironic at all: this is white music – it’s pallid, bloodless and in need of a holiday to somewhere hotter than Rules’ grey musical landscape.

The Whitest Boy Alive on Spotify