by Andy Baber
published: 7 May 2013 in Album Reviews
Tweet 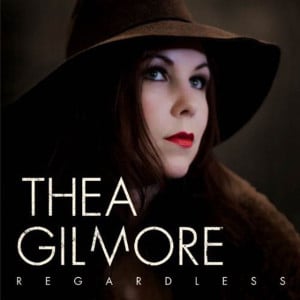 Singer-songwriter Thea Gilmore has been one of the most prolific English artists since the release of her debut album Burning Dorothy back in 1998. Her latest effort, entitled Regardless, is her 14th studio album and the first since 2011’s Don’t Stop Singing, the 33-year-old’s posthumous collaboration with Sandy Denny. Despite being a self-professed workaholic, Gilmore took two years out after giving birth to her second son in the summer of 2011, but the break seems to have done her good.

“When you write as much as I do, it would be easy to get stuck in a rut and end up putting out the same album,” Gilmore said, when speaking about her time away. “This helped me re-learn what I do.” While Gilmore has never managed to break through into the mainstream, she has never been short of critical plaudits and Regardless looks set to continue that trend. It’s clear that her time away has given her a chance to breathe new life into her music.

The album opens with an instant highlight in Something To Sing About, a sweeping and emotive number that sets the standard for what’s to come. The song’s shuffling verse breaks into an infectious chorus backed with strings, as Gilmore sings: “Don’t tell me I’ve been wasting time/ got a few minutes left before blackout/ we may be dancing on the line/ but there’s still something to sing about.” Her strutting vocals display a remarkable confidence, while the lyrics also capture a sense of fallibility.

The opener is followed by the luscious strings of This Is How You Find The Way, which continues the cinematic and grand atmosphere that runs throughout the rest of the album. The emphasis on strings is something that dominates Gilmore’s return, as shown by the first single, Love Came Looking For Me. The beautifully measured string section provides the basis for a punchy chorus, while Gilmore’s understated, but powerful, vocal takes centre stage.

Start As We Mean To Go is another catchy, pop-orientated number, one that leaves you wondering exactly why mainstream success has alluded Gilmore for so long. Then there’s the stunning I Will Not Disappoint You, where her fragile vocals combine with the languorous strings to deliver an evocative story about living up to expectations. Punctuation is also a particularly striking example of Gilmore’s songwriting ability, with an expansive guitar hook allowing her to really show off her incredible vocals.

Although Regardless sees Gilmore return with her long time producer Nigel Stonier, there is clear movement away from their previous work together. The album was recorded in five different studios and involved collaborators Seadna McPhail (Elbow), Danish producers The Suppliers (Martha Wainwright) and string arranger Pete Whitfield (Plan B). This new approach – which could have resulted in a fragmented end product – provides a refreshing new side to Gilmore, one that is ambitious and reinvigorating.

It’s hard not to get caught up in the journey that Gilmore takes during Regardless, with song after song demonstrating her ability to craft memorable and hauntingly beautiful music. With every listen, the album reveals a new layer, something that can only of been helped by the meticulous production process. Meanwhile, Gilmore’s lyrics remain as sharp and assertive as they did when she first started out, with Let It Be Known capturing her humorous side: “Let it be known that I took suggestions/ from philosophers and fools.”

In the end, Regardless is not so much a return to form as a consolidation of the talent that Thea Gilmore has always had. Her time away has allowed her to return with new vigour and push her craft further than she has ever attempted before. It’s not completely perfect – with closer My Friend Good Bye and This Road slightly arduous – but Regardless is undoubtedly up there with Gilmore’s strongest work.