Thee Spivs – The Crowds And The Sounds 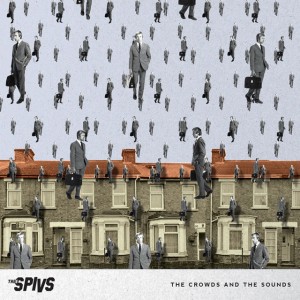 When the UK punk scene exploded in the mid to late 1970s, acts like The Clash and the politically incorrect Sex Pistols became the new pet hate of every parent that was hanging onto the upper echelons of the fast dying class structure still prevalent within the UK. The kids, on the other hand, lapped it up, seeing it as a chance to ‘stick it to the man’ in a way that hadn’t been seen – at least on such a scale – since rock ‘n’ roll first burst onto the scene in the 1950s.

The late ’70s then saw an influx of ‘lesser’ bands jumping on the punk bandwagon, the lasting appeal with these bands being the injection of a little humour into the genre. It was real tongue-in-cheek stuff, laughable if taken seriously, but after a few pints in the local drinking den it became rather enjoyable: rollickingly good fun that brightened up the depressing state the UK had gotten itself into during the notorious Thatcher years. Think Sham 69’s Hurry Up Harry and Jilted John’s Gordon Is A Moron for specific examples.

Thee Spivs, formed in London in 2007, is a band that follow this path; take them seriously and you’re in for disappointment and the probable throwing of the CD out of the window. If you use their music wisely, however, you can forget your troubles for a few minutes and transport yourself back in time to a local boozer surrounded by your mates, with everyone chucking lager down their throats and generally ripping the piss out of everything in sight to increasing hilarity as the alcohol took effect.

Album opener Social Network sounds a bit like something a band that want to be the Sex Pistols would put out; it would be surprising if that is actually the case though, because The Crowds And The Sounds is actually their third long player, so one would think they’ve now settled into their own niche.

Forget It is another up tempo foot stomper, bearing similarities to 1950’s rock ‘n’ roll but not in the same league as The Computers’ recent Love Triangles, Hate Squares; Outside Myself continues the trend, comparisons to Jilted John seem the most apparent, with The Jam’s early offerings also bearing some resemblance to proceedings.

But the title track sounds exactly like everything else that has gone before; by now there’s a distinctly samey feel, though the track does benefit from a better chorus, and the addition of a saxophone also helps. Lead single Straight Out Of Art School follows, and guess what – yes, it sounds so familiar you’re actually wondering if you’ve already heard it within the previous tracks. It’s not bad, but the lack of distinguishing features is abundantly apparent.

Thankfully, Weathered Men provides the variety the album has been crying out for for some time; it’s a much slower number, with acoustic pluckings and undulating guitar notes leading to a simple yet somehow refreshing chorus that is welcome after the incessant earlier tracks.

Spivs are actually petty criminals, the term most commonly attached to rogue traders in the vein of Only Fools And Horses’ Del-Boy Trotter, so it is fitting that the album’s best track is entitled When Mickey Pearce Waved Goodbye. The song, with its angular guitar riffs, pounding bassline and memorable chorus, appears to be an ode to a former band member that bore an uncanny resemblance to a character from the aforementioned ’80s sitcom.

Heroin Pin Ups, Let’s Talk About The Weather and Jigsaw Man return to the same formula displayed on earlier tracks – nothing different here and nothing to get too excited about either. But album closer Mozart’s Locked Away is, surprisingly, a complete change of direction; a simple, stripped down sound in the shape of a strumming acoustic guitar which provides the main accompaniment to singer Ben Edge as he seems to pay homage to – amongst others – all those ‘artists that could have been’ that never took centre stage, along with the songs they would have written.

The similarities between the majority of the tracks here is ultimately the album’s downfall; it can become a chore to play in full from start to finish, despite it only being around half an hour in length. However, stick it on when you’re in need of a pick-me-up or just want to reminisce about those drunken youthful moments and it will serve its purpose adequately.

More on Thee Spivs
Thee Spivs – The Crowds And The Sounds