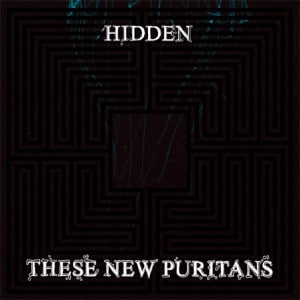 New decade, new These New Puritans album. We are truly blessed. Two years on from the release of their lauded debut Beat Pyramid, Jack Barnett and company face the demons of Difficult Second Album Syndrome and slay them with giant Japanese drums and a choir of spooky kids.

Be warned: first impressions may set the danger klaxons blaring. Self-produced by lead Puritan Barnett with Graham Sutton of Bark Psychosis, and featuring a 13-piece band with brass, woodwind and pianos as well as the aforementioned children’s choir and Japanese taiko drums, surely it must be overblown and pretentious, too full of itself to deliver on the debut promise?

Oh ye of little faith. From the orchestral, vocal-less intro Time Xone, Hidden erupts into the seven-minute opus We Want War with phased dance beats, layered voices, percussion and haunting woodwind laments. Once described as a cross between Sonic Youth, Yo La Tengo and Underworld (and by themselves as “dancehall meets Steve Reich“), this is where TNPS prove they’re worth the hype.

It’s not only the studio-filling breadth of musicians that make Hidden worthwhile; the album is also overloaded with ambitious effects. Pounding a melon and cream crackers with a hammer mimics the sound of a human head being smashed (Scott Walker used a pig’s carcass). They sample knives being sharpened, and B&Q chains. The result is boundary-pushing.

From Three Thousand’s Gary Numan angles to the lounge piano of Hologram, Hidden twists and turns with every track, never letting you settle into the comfort of knowing what next to expect.

In many ways the album’s title is ironic, as their influences are laid bare for everyone to see. The minimalism and repetitive rhythms of Reich are everywhere (particularly on Orion), as is the dark ’80s electronica of bands such as Echo And The Bunnymen and The Art Of Noise. In between are classical harmonies, spoken word (check out Fire – Power in particular) and cathedral acoustics, all underpinned by that children’s choir that weaves in and out of this eclecticism like a bizarre Greek chorus.

The fact that even the length of the tracks is unconventional somehow adds to the charm. The ironically titled instrumental Canticle is little more than a minute long. Drum Courts – Where Corals Lie needs more than six times that to give you an idea of what might have happened had Reich been asked to provide a soundtrack for Space Invaders, and even then it manages to be only the second-longest on the album. White Chords almost has a regular tune, just to show they can still make such a thing.

Pretentious? Undoubtedly. Overblown? Yes, of course it is, but we expected nothing less. This is Muse with a post-punk heart, stamping on the face of prog rock and throwing down the gauntlet to the rest of the decade. Go on, do better than this if you can.