This Is The Kit – Bashed Out 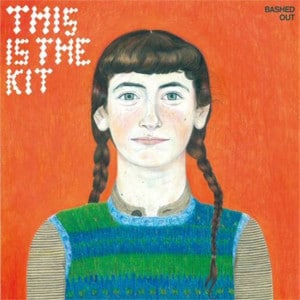 Bloody awful name for a band This Is The Kit may well be but this book is one that must not be judged by its cover. Talking of which, the album cover is another non-grabbing element that is probably best left alone unless you weirdly yearn for the return of TV series Little House On The Prairie and the annoying Half-Pint.

Basically, This Is The Kit is an outlet for English-born, Paris-based folk-rocker Kate Stables, and Bashed Out becomes her third long player and first since 2010’s Wriggle Out The Restless. She’s got some big fans, has Ms Stables: Elbow’s Guy Garvey is one admirer, but most tellingly, one half of The National’s Dessner twins – Aaron – is more than just a fan, he’s managed to squeeze in production duties for Bashed Out into a burgeoning schedule that’s also seen him “help shape the sound” of the upcoming album from Mumford And Sons.

In fact, the relationship with The National goes far deeper, with Stables’ sister Jane having helped the Americans when they first toured the UK some 15-odd years ago, providing makeshift floor and couch sleeping arrangements. Dessner also produced Wriggle Out The Restless, and both he and brother Bryce chip in here and there alongside other collaborators on Bashed Out.

So, several notable plusses to contra the aforementioned moniker and curious cover, then. Album opener Misunderstanding is an immediate indication of how the collection will shape up, a subtle but continuous guitar hook echoes alongside Stables’ delightfully gentle vocals, haunting atmospherics and occasional percussion. The title track shares a similar presence, Stables sounding a little like Dido with her understated singing. But it is the serene guitaring textures and swirling atmospherics that draw in the listener.

The excellent Vitamins is peppered with a memorable vocal melody and echo-laden effects whilst the brass-tinged Nits draws on the minimalism again, also providing an intriguing example of some of the lyrical oddities that appear within Stables’ songwriting – “the munching of the green hill” and “lucky little fatties” being a couple of lines unlikely to have seen any mileage before Bashed Out.

Occasionally we head towards the average: the acoustic led All In Cahoots opens with a line that doesn’t fill you with much confidence over what’s to follow as lyrics claim, “Just because they got away with it, doesn’t mean to say that we will, probably the opposite in fact”, sounding more like an everyday conversation than a song. We Are In features warbling vocals that fail to light up a mainly ambient focused effort, and by the time it clocks in at track nine the minimalism is starting to affect interest a touch.

The only glimpses of traditional folk appear in the banjo tinged Spores All Settling and the addictive strumming of Magic Spell but delightful floaty-synths are somewhat tempered by some more unconventional lyrics of “say the magic words, say the magic spell”. Stables then launches into a rather annoying barrage of “di did di-di, did-did-did-did didi”, making a somewhat crazy attempt to actually convince the listener to try performing magic spells for themselves: good grief, as if she expects anyone to be so stupid to actually try it, haha! It doesn’t work, by the way.

Silver John enjoys a tingling “woo-woo-woo-woo-oo-oo” climax after a plodding stroll through tempered percussion and multi-instrumentalism but the best is saved for last, with the superb Cold And Got Colder actually recalling Elbow, things getting a little more tasty for its rewarding conclusion.

Let’s face it, with the chief music writer of The National involved, Bashed Out was never going to be a dud. Whether or not it’s enough to push Stables into a more prominent place, however, remains to be seen, but surely a wider acknowledgement of her prowess can’t be far away.