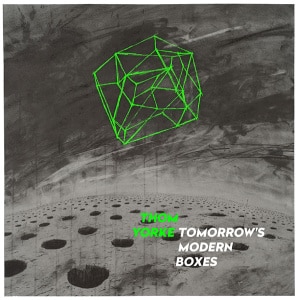 As if a week that has brought us Leonard Cohen’s Popular Problems and the first Aphex Twin album in 13 years wasn’t quite enough, here comes Thom Yorke with another surprise digital release innovation. This time, he has dropped his second solo album via BitTorrent, a method of distribution so far more associated with piracy than with direct-to-the-fans sales. Tomorrow’s Modern Boxes can be downloaded for the modest, highly reasonable sum of $6. This strategy may not instigate a shift towards legality for committed users of torrents but it does contrast neatly with U2’s entanglement with Apple. In fairness, Yorke has actually engaged a fair amount in his idea of advance publicity for this – teasing his Twitter followers with glimpses of artwork and a picture of the white vinyl.

Dropping albums with limited publicity has been Radiohead’s stock in trade for half a decade now of course, and Tomorrow’s Modern Boxes does not exactly represent a radical shift Yorke’s musical approach either. It is spare, skeletal and largely electronic in the manner of The Eraser and, like The King Of Limbs, it clocks in at a concise and disciplined eight tracks. Again, Boards Of Canada and Flying Lotus feel like significant influences and, whilst minimal, the music also feels thoughtful and carefully designed. Those who still feel aggrieved at Yorke’s abrogation of his guitar-wielding responsibilities will not find much to love here.

Increasingly impressive, however, is Yorke’s use and treatment of his voice. His obtrusive, sometimes histrionic vocals were once both Radiohead’s soaring selling point and a sticking point for their biggest critics. Now he seems content to exercise restraint, sometimes hovering in the lower end and middle of his range (particularly on Guess Again!), at others fluttering delicately in a way that is cleverly absorbed within the fabric of each song. Echo effects are used judiciously, sometimes in order to mask or obscure literal meaning, rendering the songs impervious to obvious interpretation. This tendency appears to be even more marked in his solo material than with Radiohead. It is as if his work under his own name offers him an opportunity to be at his most introspective, withdrawn and opaque. Yorke often seems to be deliberately hovering on the fringes of his own music – and yet the voice is by far the most significant instrument at play on this album, and it is in his use of the voice that Yorke is both most playful and most inventive.

Also impressive is the way Yorke draws as much as possible from a purposefully limited set of ingredients. Guess Again! is little more than a spare chordal piano figure that hazily recalls Pyramid Song and a periodically interrupted drum beat. Yet it brilliantly creates a quietly menacing mood. Yet songs like the opening A Brain In A Bottle and the superb Interference have subtle nuances and colours that make close listening utterly essential. Interference could easily have been an earlier Radiohead song, had the chorus been delivered in a higher register over bludgeoning guitars. In this context, however, Yorke allows the melody to be understated (almost passive in fact) and affords it only the most minimal of framing. It sounds vulnerable, honest and fragile where early Radiohead could sometimes be manipulative.

These songs are mostly muted and gentle and the whole album comes with a sense of quietude and reflection as virtues. The Mother Lode is fleet-footed and nimble, but its main interest comes through a carefully layered chorus of ghostly wordless vocals. Its offbeat chords at a relatively fast tempo could be drawn from ska – but it sounds anything but vibrant. Yet it’s also some way from the cold claustrophobia of some of Yorke’s work – it’s something less clear cut and more ambiguous. The album’s protracted centrepiece is There Is No Ice (For My Drink) – a wordless but by no means instrumental dream piece that feels haunted – a series of memories refracted so as to become incomprehensible.

In Interference, Truth Ray and Nose Grows Some, it feels like Yorke has a trilogy of unassumingly brilliant songs. The latter has a meticulous elegance, its elements perfectly balanced. Truth Way is perhaps the most straightforwardly moving of all these songs, given its laconic pace and the relative degree of emphasis on the vocal melody within the mix. Yet even this more conventional song sounds somehow distant and otherworldly.

For sure, much of the sound world of Tomorrow’s Modern Boxes is as predictable as the somewhat misdirected anti-corporate rhetoric that has accompanied its distribution (someone should tell Yorke that Bandcamp and other services already exist for musicians to cut out middlemen). It would be easy to condemn Yorke for continuing to traverse the same ground and the release method of course inevitably solicits instant, rash and unconsidered reactions. It is a jarring contradiction that, despite the immediacy and urgency of its public genesis, Tomorrow’s Modern Boxes is probably the least immediate album Yorke has been involved with to date. Like Kid A before it, it may turn out to be one of his most enduring.