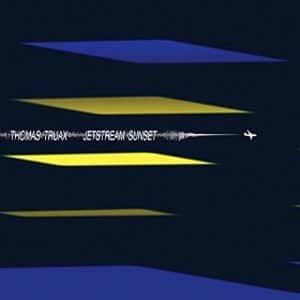 Born of the anti-folk scene from way back when, Thomas Truax has been cutting his own peculiar furrow for some time now. What sets Truax apart from his peers is the unique instrumentation he builds and uses from his recordings and live shows. As anyone who’s seen him over the years will attest, Truax live is a rather unforgettable experience. His bike wheel drum machine (named Mother Superior) and the strung gramophone horn (or Hornicator, if you prefer) are eye catching and fascinating props that add to Truax’s performance.

It’s on his recorded work where perhaps he’s come a little unstuck in the past. Without the aid of visual props, it really comes down to having quality songs that leave their mark. His tribute to David Lynch was a strong and fascinating collection, and the likes of Why Dogs Howl At The Moon possess a certain ramshackle, childlike charm, but without the aid of his bells, whistles, and bike wheels there are times when he occasionally finds it hard to set himself apart.

Jetstream Sunset is tentative step in the right direction. For a start Truax has enlisted the services of Brian Viglione, a human and a drummer, to tighten up the rhythm section. Stripping away parts of the handmade element of his approach is a brave move. Those who see Truax primarily as a novelty act will be forced to reconsider, but there’s also a sense that this might be be seen as an aesthetic choice, and that a certain element of his unique appeal could be lost. As such, Jetstream Sunset is perhaps his boldest statement so far. But regardless of the approach this time around, how Truax will be judged rests firmly on the quality of his songs.

From the outset, Jetstream Sunset feels like a more mature album. The title track’s swinging croon is familiar territory but feels assured and comfortable with Viglione imposing himself early on. The sparse sound and existential lyrics of Driving In The Dark find Truax at perhaps the most considered and most poignant he’s ever been, as he thinks about his friends and the nature of life and death.

Teenage Post Punk is a well-crafted and accurate appraisal of that spiky, stripped back sound. An ode to teenage relationship anxiety and the bands that inspired him, it’s a perfectly realised homage that twitches with an amphetamine rush and nervous excitement and gets its references spot on.

For those worried that Truax’s idiosyncracies might have been thoroughly ironed out, Shine Brightly As You Can rattles with lo-fi vigour and throws in a few nonsense lyrics for good measure and I’ve Got To Know packs a real punch and carries a genuinely unhinged undercurrent. Feeling Bad For Dracula sounds like Chris Isaak berating the Twilight generation, whist Fat Spider tells the tale of a spider on a wedding cake. There’s maturity in the album, but thankfully Truax still has that absurdist streak, albeit toned down a notch.

Jetstream Sunset is a solid album that finds Thomas Truax at an interesting point in his career. He’s developing maturity and nuance in his songs, but has not left behind the playful nature of his material. There may come a time when he moves away from the homemade instrumentation and the tales of animals sabotaging weddings, but for now, if he can avoid reworking classics like the quite appalling You Are My Sunshine (by far the weakest moment on the album) it’ll be a considerable improvement.