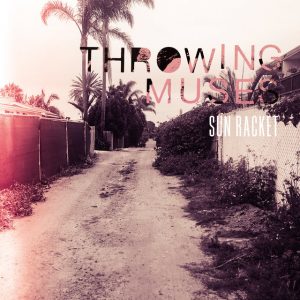 Water tends to feature frequently in the lyrics of Kristin Hersh. There’s been the very important combo of Soap And Water and imagery of waterfalls where there’s Cold Water Coming. In Milan, water is murky. Torque was written underwater apparently, and whilst we’re shutting the fuck up in Pneuma there’s even more of it. Sun Racket embraces the aquatic themes of Hersh’s previous work wholeheartedly, tips its hat in the direction of the New Orleans bywater, and dives straight in.

Throwing Muses have been together for 30 years and Sun Racket is their 10th album. By now, it’s fair to say we know what to expect from Hersh and her cohorts. Occasionally they’re spiky, sometimes delicate, and there’s always something bubbling away beneath the surface in Hersh’s disarming vocal delivery. They feel like a safe pair of hands, even when they’re dealing with subjects from the darker end of the spectrum, and we most definitely need a safe pair of hands right now.

It might have taken them seven years to produce an album since since 2013’s Purgatory/Paradise, but the wait has most definitely been worth it. Kicking off with Dark Blue, we find Hersh back underwater, in suspended animation, sarcastically stating “If I were a better dreamer, you’d be a dream come true”. The guitar tone points to a slightly noisier Muses this time around, with plenty of bass and grungy overtones. For a moment, we’re transported back to the early ’90s. All we need is a baby chasing a dollar bill to float past as Hersh intones “coming down” and we’d know that an alt-rock revival is on the cards.

Never a band to explore just one direction, they immediately change tack on Bywater, a delicate and catchy melody populated by Hersh in dreamy mode. It is here that we find the toilets filled with goldfish who may or may not be Freddie Mercury. In this slightly skewed universe, he’s a glittering orange moustachioed amputee, making his way out to sea. It’s safe to say that Hersh’s lyricism lacks none of its wit, charm, and peculiar vision this time around. Surrounded by cutesy choruses of “lalalala” vocals and a subdued drum and bass track, it feels like we’ve been transported to her own version of Wonderland. Just don’t flush the toilets when you visit. Think of poor Freddie.

These two approaches to sound are what gives the album its character. Hersh insists that the album pretty much wrote itself (she’s someone through whom music just flows of its own volition, she doesn’t have an awful lot to do with it apparently). “All it asked of us was to co-mingle two completely disparate sonic vocabularies,” Hersh says of Sun Racket, “one heavy noise, the other delicate music box”. It’s mission accomplished, because both those approaches are more than present and correct on the album. Sometimes the sense of the dark and light, loud and quiet, beautiful and ugly come together; the oppositional forces combine with powerful effect.

Bo Diddley Bridge concludes with a mournful piano line as Hersh intones “the bridge collapsing, the water waiting” over and over again. It’s both terrifying and strangely beautiful. You can practically hear the gears of the music box turning on Milk At McDonald’s, but what should be sweet, is actually deeply troubling as Hersh muses about never regretting a single drop of alcohol with a vocal that is hard to fully hear, as if it’s hiding something too dark to speak of. When the Muses full let rip, as on Frosting, with that familiar Hersh roar, they sound sound as fresh as they did 30 years ago. Sometimes the music allows itself to just be childlike and wonderful, such as on the closing moments of final track Sue’s, but for much of Sun Racket, there’s a constant tension that makes these songs worth revisiting over and over again.