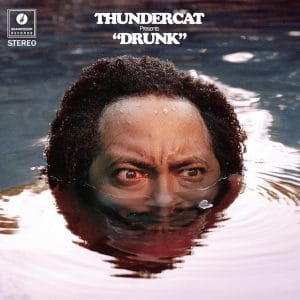 Released on Brainfeeder in 2011, his solo debut The Golden Age Of Apocalypse was a fantastically moreish, mostly instrumental melding of cosmic jazz and hip-hop, which demonstrated just how integral he is to Flying Lotus’ sound. A shift towards more conventional song structures on 2013 follow-up Apocalypse was only partly successful, hobbled by his serviceable but limited voice. Despite only being 16 minutes long, mini album The Beyond / Where The Giants Roam pointed towards richer, more mysterious terrain (highlight Them Changes, complete with a squelchy groove, lapping waves and sultry sax from Washington, reappears here).

Thundercat has said that on Drunk he wanted to explore both the frivolous and serious sides of drinking; to acknowledge that while alcohol can be a great social lubricant and way of unwinding (“it’s OK to disconnect sometimes” he sings on the ’60s-influenced, xylophone-led Bus In These Streets), it can also be hugely detrimental to your psychical and mental health. This theme of light and dark is reinforced in the album’s cover art: there’s a nerdish joy to the note-perfect reimagining of the iconic, nightmarish Apocalypse Now film poster; the look of genuine comedown terror in Bruner’s blood-shot eyes is off-set by a quizzical The Rock-style eyebrow. While his work references styles of music (smooth jazz, soft-rock, prog) that haven’t always been considered fashionable, he’s always stressed that it comes from a place of honesty and love; there’s playfulness and humour, but it’s never tongue-in-cheek.

Drunk has been constructed as a deep, elaborate trip “down a rabbot ho”, with promises of delightful and disturbing experiences along the way. Several shorter tracks deliver the delight, popping up like giddy Tweedledums and Tweedledees, acting as bridges and pick-me-ups: Uh Uh and Blackkk are displays of Bruner’s remarkably dextrous, hyperactive bass playing, while Tokyo and Jameel’s Space Ride find him enthusing about anime and space travel respectively.

At the core of the album are a selection of sumptuous, slightly warped soul-jazz numbers that would provide the perfect soundtrack if the Mad Hatter were ever to branch out into dinner parties. Yacht rock suffering from severe motion sickness. This sound was signposted on mini album track Where the Giants Roam/Field of the Nephilim – here, it’s enhanced by the presence of two roaming giants of the genre, Loggins and McDonald. When Loggins first heard, via a keyboard player, of Thundercat’s affection for his work, he assumed he was joking or being ironic in a Top-Gun-is-the-best-movie-of-all-time kind of way. After being convinced to the contrary, Loggins suggested he could probably get McDonald on board too, and Thundercat was in dreamland.

Over a backing that’s smoother than even their smoothest eighties recordings, the two sound sensational on Let Me Show You – Loggins’ pure, high voice and McDonald’s husky tones hitting the spots that Bruner’s voice can’t reach. In another playful touch, “your boy Thundercat” reintroduces the long-out-of-the-spotlight veterans individually by name, Vegas-style, to the sound of canned applause (of course, for many listening to this record, this will serve as an introduction). A full LP of collaborations between the three would be incredibly welcome; maybe they could even rerecord previous Thundercat tracks – just imagine how much more of a banger Apocalypse’s Oh Sheit, It’s X would be with Michael Mac on the mic!

Minus the star power, Thundercat does a fine vocal job on the similarly suave A Fan’s Mail (Tron Song Suite II) and Lava Lamp. A heart of darkness lurks beneath these shiny surfaces: “I’m so tired, where can I lay my head?” he sings on the later, “don’t leave me out here to die.” On the sombre Walk On By, he is drinking alone and freefalling, Lamar rapping about bullet injuries and body bags on a verse that wouldn’t have sounded out of place on Untitled/Unmastered.

Friend Zone is just fabulous, a funk jam with thick synth lines scanning across the track like dancing strobe lights: the sound of a party in full swing. After such a dizzying high, many would feel contented and head home – not so Thundercat. “The night is almost over but we still wanna party” says partner-in-crime Khalifa on the sinister Drink That. High on “gnarly” weed, they consume suspicious substances and begin a hellish descent further down the rabbit hole. Inferno includes extraordinary, disconcerting strings and malevolent cackling. On the following three tracks – I Am Crazy, 3AM, Drunk – Thundercat is in a cold sweat, deep in Colonel Kurtz country. The Turn Down finds him more clear-eyed and regretful (“look at the mess we’ve made”), before he returns to the gorgeous tune of the album’s intro track for the closing DUI, rounding things off with the optimistic reminder that “there’ll always be tomorrow.”

While its warm, buttery, lovingly produced sound suggests it will make the ideal accompaniment to a summer barbeque or beach party – and it most certainly will – Thundercat has, by skirting around the edges of darkness, created a moody, magnificent, endlessly replayable record that also makes sense in late February. Listeners will love the sound of Drunk in the morning… and at noon and at night. It sounds like victory.