Thurston Moore – By The Fire 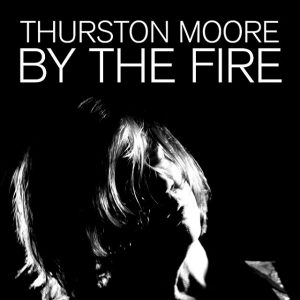 Despite a long, varied and highly engaging solo career, Thurston Moore will forever be known as the primary vocalist and songwriter of one of the most influential bands of all time: Sonic Youth. Since their implosion in 2011, Moore has kept himself busy by replicating the sound and experimental edge of his old day job. His albums veer sharply between blasts of harsh metallic noise, to oddball indie rock, to studied, thoughtful folk – particularly on the Beck-assisted Demolished Thoughts.

However, the overwhelming feeling when listening to one of his solo albums is that they’re almost as good as listening to Sonic Youth, but they often seem to be missing something, or someone; Moore, Kim Gordon and Lee Ranaldo have never been as good apart as they were together.

With this new record, his seventh as a solo artist, Moore brings back his regular band: Deb Googe of My Bloody Valentine on bass and backing vocals, Jon Leidecker aka ‘Wobbly’ of Negativland on electronics, James Sedwards on guitar, and Sonic Youth’s Steve Shelley sharing drum duties with Jem Doulton. And it is the moment where he transcends his old band, making moves Sonic Youth would never have made. This is the first album in his solo discography that feels truly unique, original and distinct from the work he’s done before. It’s warmer, brighter and much more inviting than many of his previous albums, and it showcases an adventurous side to his songwriting that has lain dormant for some time. Put simply, it’s the best thing he’s done since 2002’s Murray Street.

On the face of it, especially if you’re new to the Moore/Sonic Youth oeuvre, this might look like a large, unwieldy album – and that’s exactly what it is, stretching out its nine songs over two discs, with the longest track running to a monstrous 17 minutes. But this isn’t anything new for Moore: one of Sonic Youth’s most popular songs, The Diamond Sea, ran to nearly 20 minutes, as did a track on his first solo album from 1995.

The album opens with Hashish – a crunchy, shreddy guitar-led garage rocker that evokes Television in the way it unfolds, slowly yet steadily, into its final form. Then you’re hit with the sand-blasted, low-slung stoner grooves of Cantaloupe, and the true magic of By The Fire is revealed: there’s something for everyone. Moore then hits you with a pair of epics – the endlessly entertaining Breath, and the monstrous mermaid epic Siren. The former is a guided tour through Moore’s entire canon, touching base on soft instrumental passages and riotous guitar fireworks, while the latter teases and pokes and seduces you for over 12 minutes. The band are on unbelievable form here; the interplay between instruments is breathtaking.

When he does slow down to take a breath, on the beautifully sensual Dreamers Work and the supple grooves of album closer Venus, we see the true extent of Moore’s capabilities on display once again. It’s tempting to think of the solo albums of displaced band members as bank account-lining pension contributions, but Moore has really outdone himself with By The Fire.

At this point in his career, with his legacy assured and his fans hanging on his every release, Thurston Moore really doesn’t have to try this hard. But try he has, and By The Fire is all the better for it. It may not the best of all of the Sonic Youth solo albums – that dubious honour goes to Kim Gordon’s 2019 classic No Home Record – but it’s better than some actual Sonic Youth albums, and that alone makes it an essential listen. A thriller from the first second to the last.