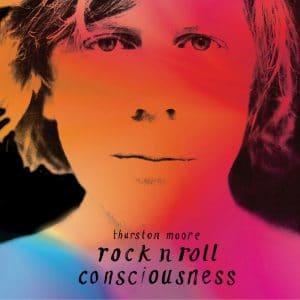 Sonic Youth had a reputation in the ’80s and ’90s for exploring the conventional boundaries of rock music, and attempting to place themselves outside of these parameters. In turn the band is said to have been a major influence on alternative and indie bands in the years to follow. While no longer enjoying the titular youth of his former band, their lead singer, Thurston Moore, has evoked familiar themes by calling his latest solo album Rock N Roll Consciousness.

Featuring five songs, each one clocking in between six and 12 minutes long, the challenge Moore undertakes is that of attempting to maintain the interest of listeners more accustomed to a series of three-minute singles. Alternating between six-minute songs that would be long on any other album and the longer showpieces, Moore creates a dynamic that intrigues and fascinates from the beginning.

There is a curious juxtaposition of the traditional and Moore’s habit of straying from the beaten track. The album opens with the minimalist riff of Exalted, a repetitive guitar loop that adds percussion beats and grows steadily before transforming into a ranging guitar solo. The transition between distinct sections of the song are subtle, meaning that when the crashing of cymbals is added to the now overdrive-heavy guitar, it is surprising to be introduced to a new sound.

Moore’s distinct, understated vocals join proceedings after around eight minutes, bringing a raised tempo before fading out around a minute a half later, allowing an instrumental climax to the song. As opening songs go, Exalted serves its purpose: like the introduction of a novel, themes and characters are introduced without touching too much upon the actual content. While this is a reasonably popular musical trope, with The 1975 and Nick Cave & The Bad Seeds featuring a distinct introductory song on their most recent albums, it is not so common for the first song to account for almost a third of the album’s entire length. Moore has taken a feature of rock, and put his own spin on it to create a fascinating concept track.

The album kicks on from Exalted with Cusp, furious drumming setting the scene for a song that is half the length of its predecessor. While not a love song in its expected form, this is certainly a song about love, the lyrics among Moore’s most optimistic. However, the relentless rhythm of the drums generates a feeling of unease; it is as though Moore is unwilling to contemplate love as an entirely positive sensation, despite admitting “My heart is yours” and “Magic drowns where we’re apart”. Turn On, the following track, retains this unease in its unsurprisingly long introduction, with its minor key and slower, but no less unnervingly consistent cymbal beat.

When Moore begins to sing the track bears similarities to Iggy Pop’s Break Into Your Heart, with similar appreciation to rock at its purest form, and the hint of menace in the vocals. The soft-loud-soft structure popular in ’90s punk is unexpectedly prominent, albeit subtly, while an excellent guitar solo claims the middle of the song. Improvisation must be at the heart of Moore’s recording process, such is the complexity of the melody. Like with Exalted, the focus of this long track is upon transitioning between different musical phases until culminating in one last crashing cymbal.

Smoke of Dreams continues where Turn On left off, Moore’s vocals retained for the end of the track to bring an end to the guitars and drums that had dominated before. Aphrodite brings the curtain down on the album with a culmination of the features seen previously; big, dramatic chords, minor keys, understated vocals and guitar-heavy melodies. Moore’s album subverts the expectations of a former frontman’s solo album in that the focus is firmly on the instrumental aspect, rather than on his own posturing. It is the album of a man pushing the boundaries of what rock music can be, an experienced artist not interested in being a performer.

Rock N Roll Consciousness is thus a success; it is intensely listenable, bearing the drama of a rock opera without the pomp or ridiculousness, and the brazen confidence of the rock star without the showmanship. Each track melds into its predecessor and its successor, creating a mesmeric experience that truly captivates the attention and inspires awe at the sheer musicality of Thurston Moore.