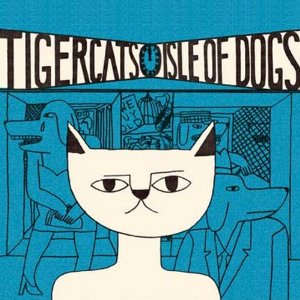 Tigercats are one of those bands who live and breathe their music. They sing about what matters to them; the places and people they know and the trials and tribulations of being young, no matter how inconsequential it might seem. Like Los Campesinos! before them, they’re self-absorbed, exciting, full of energy… and having a really good time along the way.

Their debut album brings together two EPs and a few new songs, and takes listeners on a whistle-stop tour of their East London stomping ground. Opener Coffin For The Isle Of Dogs – a declaration of independence for the Isle of Dogs – calls for “commuters in their commuter trains and kids in their prams” to “pull up the bridges, don’t let anyone in”. It’s a slow, creeping start that ends with brattish chants, but it’s the second song, Konny Huck, set in Hackney Downs, that sees Tigercats lay their cards on the table. With infectious hooks and crunching bass, it sets the tone for the rest of the record.

Later we head over to “a trendy bar in Dalston surrounded by idiots with ridiculous haircuts” in The Vapours; a song about singer and former Esiotrot front man Duncan Barrrett’s dreams about a girl he lusts after. The dreams get more and more outlandish – one minute she’s in an imaginary record shop staffed by “new wave one hit wonders” Jonah Lewie, Jilted John, The Only Ones and “those guys who sang Turning Japanese”, the next she’s swimming with turtles in the Regent’s Canal. This is where Tigercats are at their best; when their hormones take control they produce some of finest nuggets of indiepop since Allo Darlin’ first appeared on the scene. There’s no soul-searching or innuendo – this is music to dance to and they’re on a mission to make people grin. There’s a warm, knowing humour throughout, and this is at its most obvious in vegetarian anthem Nude With Dogs: “She said ‘Fuck you for killing my animal friends and fuck you for eating them'”.

But it’s not entirely undiluted indiepop; they have a stab at being serious a couple of times. It might not be his natural territory, but Barrett pulls off a heartbreaking tale of loosing “a vegan with a thing for leather” in Stevie Nicks. Kim and Thurston’s lazily strummed strings doesn’t hit quite the same mark, but their third slowie, keyboard player Laura Kovic’s only solo, is a gorgeously purred bittersweet tale of unrequited love.

Elsewhere Full Moon Reggae Party utilises Kovic’s pearly voice for chorus-duties, and Easter Island nods to You, Me, Dancing by Los Campesinos! with its toyish, tinny backing and hyper chorus: “Not knowing where we’re going, that’s part of the adventure”. But the song the album will undoubtedly be known for is Banned At The Troxy. Already an indiepop disco favourite, it’s got a warmth and sophistication that the rest of the album lacks – as though all the recording budget was poured into this one track. “We didn’t wanna play anyway, we’re gonna be bigger than national debt, we’re Tigercats, we’re banned at The Troxy” Barrett declares, like a stroppy, teenage Darren Hayman.

It might be too sickly sweet for some, but if you like your indiepop fiercely upbeat and with choruses you’ll be singing for days, there’s a lot to love on Tigercats’ debut.