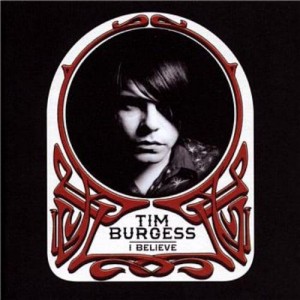 Tim Burgess. You may remember him from a small band called The Charlatans. So what are we to expect when part-time falsetto Tim ditches the grey of Lancashire for the blue of California? In a nutshell, it is exactly what is expected.

I Believe is very much The Charlatans at the Mardi Gras, having met up with a new keyboard player and brass section on the way. The album opener could concievably be the soundtrack for the next big jeans ad with its Americana references and squeezed-out, high-pitched “I believe in…”, line repeated ad infinitum. Things pick up a little with Held In Straps, which, despite having the frankly awful line, “Even when I’m crap, I’m still too good for you,” finds some kind of credibility in an enjoyable, if rather obvious, minor chord progression.

Only A Boy sounds like Hour Of Bewilderbeast-era Badly Drawn Boy, and not just because of its title. Jangly guitar layered over some lively brass sections give this song a somewhat novel sound, and Tim, to his credit, pulls it off rather well. Unfortunately, We All Need Love is as clichéd as its title suggests, lacking anything challenging or new.

It’s songs like We All Need Love that highlight my main concern for this album, namely that it is simply too comfortable with itself. Tim sounds like a man indulging himself, eventually free of his band. At the same time, it seems to be the case that Tim is so happy with his new approach that he simply wrote an album’s worth and stuck it together. The lyrics are competent, but nothing more really. The falsetto loses appeal almost immediately, and the use of essentially the same kind of rhythm guitar in almost every track betrays I Believe’s position as smack-bang in the middle of the road.

Perhaps an early summer release could have done the album the world of good, with cheerful ditties such as Oh My Corazon contributing to I Believe’s summer tripping theme. As it stands, perhaps long-time fans will be able to look past this offering’s lack of substance. Everyone else, however, can expect a nice album that, to be brutally honest, will start to sound old after not long at all.