by Steven Johnson
published: 20 May 2020 in Album Reviews
Tweet 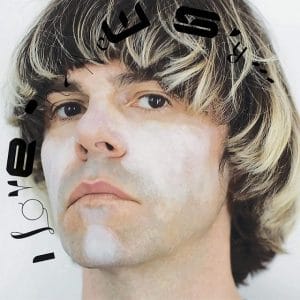 For most people the current pandemic-enforced lockdown has meant a slowing down in the pace of life. Social opportunities have been curtailed, cultural events have largely disappeared from calendars and most distressingly jobs and business have been impacted. Yet, for Tim Burgess life has arguably never been busier. He has found himself with a new temporary main role in life, namely being the organiser of nightly listening parties on Twitter where music fans across the world gather to listen to albums in full. His boundless enthusiasm for life in general, deep love of music and irrepressible urge to connect with and promote artists both new and old means he’s ideally suited to the role. If that wasn’t enough he’s also had the small matter of the release of his fourth solo album I Love The New Sky to think about.

If solo side projects are meant to afford an artist opportunities to explore areas not visited by their main band then it’s hard to see I Love The New Sky as anything other than an unqualified success. There are sounds and styles here you would be unlikely to find on an album by The Charlatans but there’s also the familiarity and warmth of his voice that acts as a special binding agent. The album also works well as a reflection of his personality and attitude. There’s an openness, positivity, companionable geniality and restless creativity to it and the impression quickly forms of someone whose brain rarely stops.

It’s also the first record Burgess has written on his own (previous records saw him write with artists like Lambchop’s Kurt Wagner and Peter Gordon). He does call upon the likes of Factory Floor’s Nik Void, Daniel O’Sullivan, Thighpaulsandra, Peter Broderick and Charlatans guitarist Mark Collins to play on the record, however.

Empathy For The Devil gets things underway with bustling energy, starting like Boy’s Don’t Cry by The Cure before bouncing along chirpily and finishing with a violin flourish while an air of the similarly named song by The Rolling Stones floats appealingly above. It’s a good example of the reaggregated nature of the songs that feature on I Love The New Sky. Obvious paths are not followed while ideas overflow. There’s also a pleasing immediacy to the tracks that will ensure that longstanding fans will have plenty to enjoy.

The opening of Lucky Creatures may catch a few by surprise, all dramatic, upwards-rising strings and marching drums before a distinctly sunshine pop feel takes over. It’s like The Free Design playing with The Charlatans with an orchestra in the background. There are also a couple of moments that see him veer into prog-rock territory. Comme D’Habitude is an enjoyable exercise in song segmentation with some nice pace variations and a vocal contribution from Burgess’ son. Only Took A Year occupies similar ground, boasting a winding organ line and typically down-to-earth lyrics – “What’s your favourite Cure LP? Mine’s Pornography, but it could be any one of three”. Sweet Old Sorry Me meanwhile projects a sunny Paul McCartney vibe.

Warhol Me sees him continue his journey through less familiar territory, built around repeated ‘Andy Warhol’ vocal refrains and motorik grooves. It culminates in a droney ending that feels like something that would have worked even better if he had gone deeper. Elsewhere, The Mall sees him in a more reflective mood but he can’t resist injecting more energy into the track as it progresses. Next up, Timothy is a thoughtful, synthy escapade and I Got This is another lively, self-confident run out. Undertow strikes a more downbeat, almost mournful note with Burgess bemoaning “it’s too late for any kind of sorry”.

Laurie sees him return to his trademark optimism, singing of “beautiful things suspended in dreams” and how he “can’t recall a time when I felt this elated”. It’s an arms-aloft closer with the massed backing vocal in particular helping to create a rousing finale. On one level I Love The New Sky is simply a collection of engaging songs but on another it’s a call for togetherness, an appeal to stay strong and embrace life. Whichever view you take it’s very much a record for these times.