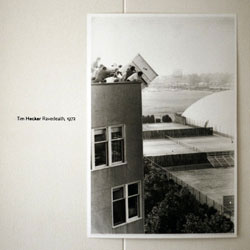 One of the most fascinating trends in experimental music in recent years has been the occasional slipping, almost by osmosis, of some very challenging noise and sound based music into somewhere close to the critical mainstream. Many of the success stories have been connected with the Editions Mego label, from the bizarre appeal last year of instrumental artists such as Emeralds and Oneohtrix Point Never to the classics of this field, including Endless Summer, that lush, hazy, expansive masterpiece from Fennesz.

Canadian Tim Hecker has been operating in this fuzzy area since 2001. His artistry is deeply respected by those familiar with this music (which can veer from the hypnotic to the highly abrasive with little warning) but he has yet to make much of a dent in the conversations of the mainstream music press. Perhaps this extraordinary album might be the one to bring his output to wider attention. It’s certainly among his most concentrated and well crafted works – the best since Harmony In Ultraviolet and arguably the most successful of them all.

Hecker’s music is not easy or accessible. There are hints of melody but these are always subservient to mood, texture and feeling. There is little or no percussion and rhythm is not a prominent element. Yet at his best, Hecker can be evocative, moving and expressive. This is certainly the case on Ravedeath, 1972 – a suite of music where the location and methods of recording prove to have been crucial. Hecker recorded this in a church in Reykjavik – a choice of location that gave him access to very different possibilities in terms of instrumentation. Ravedeath, 1972 features acoustic instruments as much as it does Hecker’s familiar electronic layering and processing. The church’s pipe organ is used a great deal as are piano and guitar. For the production, Hecker collaborated with Bedroom Community’s Ben Frost, which may account for the album’s frequently doomy, heavy feeling.

One of Hecker’s major concerns is decline and degradation. The album’s title and a number of the individual track titles suggest that this preoccupation is still very much in his mind. Yet the titles also suggest some sort of internal, personal conflict – perhaps even a crisis of confidence. There’s two parts to Hatred Of Music – as well as Studio Suicide and Analog Paralysis. Could it be that Ravedeath, 1972 is some sort of response to writer’s block? Hecker’s responses to questions are usually ambiguous or evasive so this remains pure speculation. The album cover and the title of the opening track (The Piano Drop and an image of a piano being pushed from the roof of a tall building) perhaps tie in with this too. Is this a battle to respect music again? Or is it a response to those who would deny that ambient noise is music at all? Whatever the mental situation that prompted this work, it hardly sounds as if Hecker is short of ideas.

The use of the church organ is a particular masterstroke and it imbues Hecker’s compositions here not with grandiosity, but with a sort of faded grandeur that chimes brilliantly with his familiar themes. It also offers a superb range of texture and sound, sometimes attacking and aggressive, at others soft and warm. As a result, much of Ravedeath, 1972 takes Hecker away from comparisons with ambient artists such as Tangerine Dream or Brian Eno and towards perhaps more improvised forms of music. It is once again tempting to speculate. Is Hecker familiar with the album Spheres, on which Keith Jarrett played exclusively on an organ, using the stops in what was then a radical and innovative way?

Some have described this music as among Hecker’s most claustrophobic. This is an easy word to reach for when it feels, particularly on Hatred Of Music, that Hecker’s processed distortion is enveloping the listener. Studio Suicide too also has a menacing, threatening tone. Yet in addition to this it also feels open and reflective. Perhaps the ultimate impression of Ravedeath, 1972 might be less terrifying and more mournful. When, towards the end of Hatred Of Music I, the church organ emerges from the cacophony, there is a sense of melancholy acceptance. Perhaps out of chaos and violence, something serene and balanced can eventually emerge.