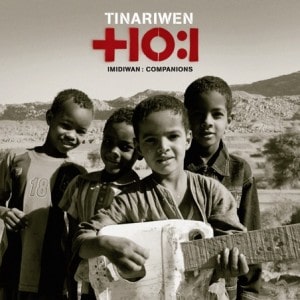 As one of the best-known African groups outside of the continent, there was always the danger Tinariwen could make the leap from Western popularity to Westernised collaborations, thereby diluting their original impact.

Thankfully they keep the fruits of their own highly original work with the likes of Tunng to one side, for Imidiwan (Companions) continues to speak directly in their own totally unique language.

It’s a language we have come to know and love from the Tuareg tribesmen, one that uses traditional rhythms and melodies but seems at the same time tantalisingly close to Western dub or psychedelia. Enseqi Ehad Didagh (Lying Down Tonight) provides the perfect example, its stanzas ever so slightly clipped on the last beat, so that what is essentially a meditation keeps a frisson on tension and energy.

The theme throughout is unity, with few sentiments speaking more loudly than the opener, Imidiwan Afrik Tendam (My Friends From All Over Africa), a softer contemplation sung in unison that speaks of happiness and contentment.

This unison singing enhances the sense of community, and as the album progresses it is possible to also take in the intricacies of their guitar work, and the way their unified music can strike such a chord with Western listeners. It helps that a track like Tahult In (My Salutation) can come so close to resembling dub without actually quite being in the style.

Meanwhile Kel Tamashek throws off highly intriguing cross rhythms of the sort Tinariwen seem to be able to do in their sleep, while Lulla sways into view as a hypnotic, triple-time dance. Chegret (The Thread) takes a more sombre, thoughtful approach as a counter to those exhilharations.

As you might expect, Tinariwen’s music paints vivid pictures of the country and continent in which they live, and it doesn’t take much imagination to picture the shimmering sand of the Sahara, whether in a song like Tenhert or in the vivid, unnamed track that closes the album. As evocative as any of the vocal tracks, it’s akin to the desert wind itself.

Imidiwan, then, builds even on the successful Aman Iman album, Tinariwen’s sound forging its own distinctive path with real emotion and a sense of togetherness. Taken on its own merits, this is life-enriching stuff.