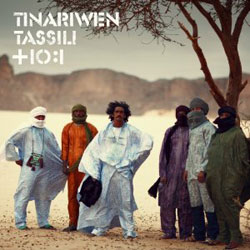 Over the past couple of decades, a number of West African artistshave taken advantage of a new international interest in ‘world’ musicto gain attention beyond their own countries. Yet while one canimagine the likes of Vieux Farka Touré and Toumani Diabatéfeeling equally at home in Paris or London as Bamako these days,there’s still something wild and untamed about Tinariwen that setsthem apart from their fellow Malians.

As a nation straddling the divide between the vast wilderness ofthe Sahara desert and the greener savannah to the south, Mali is alsoa meeting point of several disparate cultures. As nomadic Tuaregs,the music of Tinariwen varies greatly from those performers from moresettled village traditions such as Touré and Diabaté. Their nameactually translates as ‘deserts’ and while they may use electricguitars and other modern instruments, the core of their sound is stillas raw and elemental as the harsh landscape inhabited by theirancestors since time immemorial, and their songs speak passionatelyabout the issues their stateless people continue to face. Many oftheir older members were rebel fighters and refugees during a periodof armed conflict with the Malian government, giving them a slightlydifferent type of life experience to say, Coldplay.

Founded as far back as 1979 but not ‘discovered’ by French worldmusic ensemble Lo’Jo until 1998, Tinariwen’s two most recentalbums – 2007’s Aman Iman and Imidiwan two years later – consolidatedtheir status as a major crossover act, culminating in a Glastonburyappearance in 2009. Recorded in the depths of the Algerian desert,Tassili is something of a back to basics album for the freewheelingcollective after their years of global jet setting, but it also seesthem take a further step forward by adding some new ingredients totheir tried and tested formula.

As the first notes of Imidiwan Ma Tenam bleed forth from thespeakers, the initial impression is that not much has changed.Traditional Tuareg melodies are chanted atmospherically over abackdrop of freeform guitar and rhythmic handclaps, with some subtledrumming underpinning the campfire groove. But weaving his way almostimperceptibly into the mix is Wilco lead guitarist Nels Cline,who was also involved in Tassili’s post-production.

The western influence is more obvious but no less complementary onthe sublime, funky Tenere Taqqim Tossam, featuring the English vocalsof TV On The Radio’s Tunde Adebimpe. It’s perhaps not surprisingthat the front man of this most eclectic of US bands is collaboratingwith world musicians, but what’s commendable is the way he restrainshis often soaring voice to make sure it fits unobtrusively intoTinariwen’s distinctive sonic world. Next track Ya Messinagh sees thefirst appearance of The Dirty Dozen Brass Band, the mostrespected exponents of the famous New Orleans style. It’s hard tothink of two more different musical styles, yet the Band’s maudlin,sonorous timbre adds a rich new texture to Tinariwen’s songs oflonging and defiance.

Above all, the stars of Tassili are Tinariwen themselves.Noticeably more acoustic than on their earlier records, we get towitness the fragile beauty that exists in their music alongside thevisceral, bluesy drive. Walla Illa is a wonderfully lilting, soothinglullaby, with Adebimpe providing softly cooing backing vocals, whilethe complex solo guitar work on Tameyawt demonstrates that these aremusicians with the dexterity and flair to match the best anywhere. Thecontributions of an impressive guest list only serve to furtherenhance this compelling music, which remains uniquely imbued with thespirit of the environment that shaped it.