Tindersticks – Can Our Love… 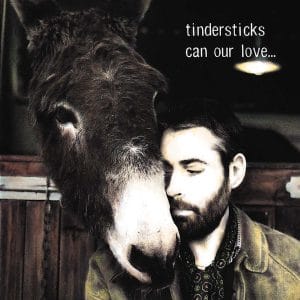 Tindersticks aren’t the cheeriest of bands and Dying Slowly, the first track on their fifth studio album Can our love… is just about as gloomy as songs get. “So many squandered moments, so much wasted time, so busy chasing dreams I left myself behind… this dying slowly, it seemed better than shooting myself…”. Well, each to his own.

And things do cheer up a bit after that. There’s a Doors-like intro to one of the standout tracks, People Keep Comin’ Around, with soft but insistent keyboards and almost a jazz feel. Stuart Staples’ lugubrious voice is at its best here, the ubiquitous (and sometimes irritating) tremor less obvious than in the darker moments.

Tricklin’ is a fascinating little track: overlays of voice and the most minimalist backing guitar paint a mesmeric sound picture of water, doing just that. Lovely stuff.

That tremor is back in the title track, not one of the best to my mind, though there is some lovely guitar (Dickon Hinchcliffe?) and trumpet (Steve Sidwell) tootling away in the background.

The pace slows down again in Sweet Release and Don’t Ever Get Tired, pleasant ballads that won’t frighten the horses but don’t do too much for me. No Man In The World is really downbeat, the intro a softly spoken monologue over a single guitar, relating a story of sitting in the garden watching a house burn down, among other disasters.

Don’t get me wrong – I’m usually a sucker for the mean and the moody, but I do like it to have a bit of bite, and too many of these tracks are interchangeable and – dare I say it – bland. It does have an elegiac quality, and many pleasant moments, but it’s somehow lacking the interest and variety of earlier work, especially the original Tindersticks album. Probably good if you have trouble getting to sleep, though.