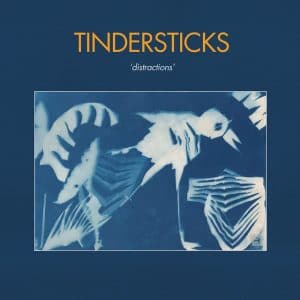 At the moment it feels like each new week brings new stories of musicians successfully adapting their creative processes in response to the ongoing pandemic. Distractions, the 13th studio album by Tindersticks, is the latest proof of how resourceful musicians have been in the face of this adversity, also showing how disruption to regular routines can have unforeseen, positive consequences.

The band were in the middle of a tour promoting their last album, 2019’s No Treasure But Hope, when the emergence of covid forced them to cancel the dates. The resulting periods of lockdowns and restrictions saw frontman Stuart Staples start to tentatively work on new ideas which then slowly snowballed into Distractions (as he explained in more detail in our recent interview).

These circumstances saw him embrace different ways of working, often determined by the instrumental means available to him. Opening track Man Alone (Can’t Stop The Fadin’) was the first outcome, the noticeably different sound that defines the track feeling apt given the different world in which it was created. Staples’ vocal is sensuous (it always is, regardless of external factors) but here it’s also feverish and claustrophobic, in short not a million miles away from the feelings brought about by prolonged time spent indoors.

Another dimension became apparent when he explained how, later in the year when restrictions had eased, travelling back from the studio in a cab at night through London helped form the track, as the city rushed by outside. It’s something well replicated in how the crisp drum machine-generated percussion, snaking basslines and vocals all spiral together. It feels like one of the best examples of a guitar band pushing themselves since Lambchop underwent a similar minor reinvention on The Hustle, the defining track on their 2016 FLOTUS album.

The closing track on Distractions, The Bough Bends, might not be quite as striking but is equally significant in the context of the album. Musically, it uses birdsong and scorched guitar as backdrops for Staples’ poetic lyrical musings. He speaks of ” good ideas badly executed”, “irritating wounds we need to attend to” and “the ecstasy of erasure”, lines that all sound very Tindersticks. Later his singing overlaps with the spoken lines and he sounds unsettled as he rues “distractions, distractions, distractions”. It’s like he’s revealing hitherto closely guarded secrets, again something that has cropped up on previous albums.

And that’s the important point to keep in mind. For all the musical evolution and potential new doors being enticingly opened, there are also strong links to their past. The three covers included on the album further confirm this, also showing another positive side to the unexpected covid-enforced interruption, namely giving the band time to record tracks they have toyed with in one way or another for years.

Their version of Neil Young‘s A Man Needs A Maid is both minimalist and gauzy, also seeing longstanding collaborator Gina Foster add some luscious vocal harmonies. Dory Previn‘s Lady With The Braid arguably fares even better. “Would you care to stay ‘til sunrise, it’s completely your decision” sings Staples, “would you care to stay awhile and save my life?”, lyrics that feel like they could have been drawn from any Tindersticks album over the last couple of decades. Their treatment of Television Personalities‘ You’ll Have To Scream Louder is bolder, seeing them flex their musical muscle, sounding both more agitated and animated.

Moments like the poignant Tue-Moi, a piano-led song inspired by the 2015 terrorist attack at Le Bataclan in Paris, are more calm. I Imagine You is similar and closer to Staples’ soundtrack work, seeing him again alternate between whispering and singing. David Boulter’s playing of the musical saw helps further set the song’s spectral atmosphere. Confessional moments have been a regular feature in their music over the years but here they sound as intimate and softly-delivered as ever. It confirms how they’ve always been a band that have explored human emotion in deep, meaningful ways but Distractions feels like something more, like the beginning of a fresh chapter in their story.