Tindersticks – Falling Down A Mountain 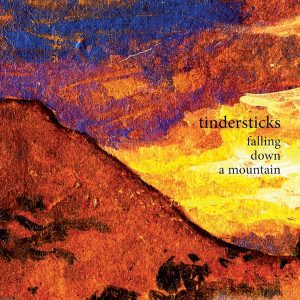 All credit to Tindersticks for cornering the market in velvet-draped, late-night, orchestral indie-lounge cabaret. The trouble is, when you’re the sole proponents of such a tiny sub-genre, there’s not much room for manoeuvre. Hence why they have essentially released the same album – the same very good album, mind – approximately once every two years since the mid-’90s.

Falling Down A Mountain, though, pushes a few new boundaries – and whilst it’s not the mainstream crossover album to bring them untold riches, it does mark a newfound spirit of adventurousness. Of course, the music’s still resolutely afterhours in tone, and Stuart Staples still sounds like the missing link between Roland Gift and Paul Shane. But the melancholy club style is at least partly laid aside, introducing both dry mirth and disconcerting menace.

The title track opens the album with a distinctly jazzy feel, though it’s the squeaky, mournful avant-garde trumpet and rattly percussion sound of Soft Machine rather than the smoky jazz-club style one might expect. The sense of claustrophobia fits Staples’ voice perfectly, which kicks in just as the track starts to become unsettling, sounding as gin-soaked and weepy as he has ever done.

Black Smoke is similarly dark and murky; though for different reasons altogether. Here the oppressive melancholic blues of Nick Cave‘s most recent work is wedded to a Tom Waits-style distorted vocal track, giving a nasty Western swagger which sits at odds with the modest tone of previous albums.

The salt-encrusted, sun-baked desert theme continues with She Rode Me Down, a sombre mariachi number, and with the creepy instrumental Hubbards Hills. The Tijuana brass stylings are a welcome diversion for fans, who, like this listener, stopped buying Tindersticks albums after overdosing on strings and woodwind.

Only Keep You Beautiful and Factory Girls, with their sparse crooning and polite instrumentation (folky guitars and tinkly piano repectively) fail to excite by remaining wholly in familiar Tindersticks territory.

That said, the two highlights of Falling Down A Mountain don’t stray radically from formula. Harmony Around My Table shows the band doing what they do best: alluring, stylish melancholia of a burgundy hue. A shuffly beat, festive-sounding glockenspiels, weepy lyrics delivered with lashings of vibrato – they’re all there: “I found a penny, I picked it up / The other day I had some luck / That was two weeks last Tuesday / Since then there’s been a sliding feeling.” Vintage Tindersticks.

Peanuts, fortunately not a cover version of the George Dawes classic, is equally likely to find its way onto a Greatest Hits. Here the vocal skills of Mary Margaret O’Hara are enlisted for a charmingly silly duet about, erm, peanuts. “You say you love peanuts / I don’t care that much / I know you love peanuts / And I love you / So I love peanuts too.” Is this just I-say-potato-you-say-tomato whimsy or saucy Bogart-Hepburn innuendo? Open to discussion, but either way it’s delightful, tongue-in-cheek fun.

So then, Falling Down a Mountain: enough classic Tindersticks to keep die-hard fans more than happy; and enough new stuff to everyone else think twice about relegating them to the cabaret circuit. There’s life in the old sticks yet.