Tindersticks – The Something Rain 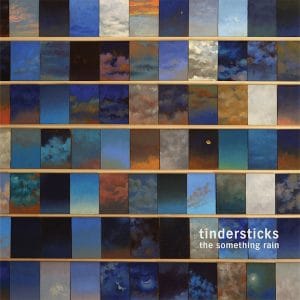 In recent years Tindersticks have enjoyed something of a creative and personal renaissance, reuniting after the band’s disintegration in 2003 to release a series of albums that have successfully reaffirmed the band’s long held musical and lyrical interests. 2010’s Falling Down A Mountain was their most consistent and assured release for many years, yet ninth album The Something Rain arguably tops this, seeing the band in superlative form.

At times they have been overlooked, under-appreciated or erroneously dismissed as irrelevant by some seemingly based purely on the simple fact that they still exist, which makes another successful return even more quietly satisfying. The band’s ethos and Stuart Staples’ ability as songwriter have never been in question and lyrically the themes haven’t changed a great deal, still exploring the darker, uneasy corners of human nature/relationships. Indeed, the first words he sings (on second track Show Me Everything) – “complexities…treacheries”- sum this up in succinct style. Musically it is in possession of a richer, fuller sound with Terry Edwards’ saxophone registering more prominently than on other recent offerings.

Chocolate opens the album, offering a sequel to My Sister, their much-loved narrative track from Tindersticks II. It’s a superb opener that revels in language and everyday detail, patiently telling a story that is at times comic, at others sad. David Boulter takes over vocal duties to relay the tale that involves an unnamed narrator pursuing a romantic liaison that ends in unexpected circumstances, culminating humorously, as he discovers that his acquaintance is actually male rather than female; “Shit…you’re a chap!” Last year saw the band focus on releasing their scores to Claire Denis’ films but here they are telling their own story, an eventful drama condensed into nine minutes.

What follows can be (rather indelicately) divided into two categories – soulfully lugubrious moments sitting alongside more full-bodied, up-tempo tracks. Of these, This Fire Of Autumn stands out and could almost be autobiographical in content, depicting the band’s relative resurgence of late. Staples delivers his lines with the vigour of a man completely at ease with and immersed in his art. Slippin’ Shoes is even better, bold, fluid saxophone expressions underpinning a surprisingly strident track (one of only a handful of Tindersticks tracks that could be reasonably described to bounce along). It sees Staples in more optimistic mood as he sings about how “we can celebrate while our hearts are breaking, laughing through that news” in his distinctive, sonorous tones.

Frozen sees him revert to a more familiar, darker lyrical place however, imparting lines about how “lovers come, lovers fade, lovers throw themselves under cargo trains, lovers cling on by their fingernails”. It ends with him repeating “if I could just hold you, hold you” sounding more insistent, impassioned and desperate with each delivery. These moments of emotional fervour are judiciously broken up by more subdued and reductive moments. A Night So Still sounds almost tangibly heavy, infused with a slow organ sound that seems to exert an analgesic quality over the track. It hints at the soul-noir that the band first fully visited on 1999’s Simple Pleasures album and continue to explore with considerable success. Similarly, an almost oppressively beautiful bleakness settles over Medicine.

It may be nearly two decades since their debut album but The Something Rain sounds like a band in their prime, switching between styles effortlessly and enjoying a new lease of life. Long may it continue.