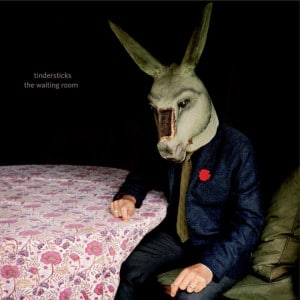 Even before being called upon by filmmaker Claire Denis to provide soundtracks for Nénette Et Boni and Trouble Every Day – the first fruits of a partnership lasting over many years – Tindersticks have long had a visual affinity.

Still startling after two decades, the sound the band honed over their first two LPs was alive with filmic flourishes: in the woozy monologues, grainy character pieces thick with cheap booze and regret; in the hues of country, flamenco, bruised barfly blues and swooning strings and, always, in  Stuart Staples‘ inimitable baritone: chocolate flecked with cigarette ash, the quivering vibrato of a man at his tether’s end. They remain a natural fit for filmmakers – whether it’s Denis’ dark tales or upcoming David Foster Wallace road movie The End Of The Tour, where their aching lament to separation City Sickness soundtracks a drive through the Illinois suburbs as well as it might those of the band’s own, distant Nottingham.

For The Waiting Room, Tindersticks gave different tracks to a number of filmmakers – including Denis – who shot visual accompaniments to be screened on their upcoming tour. “The films should attempt not to describe the music,” according to the brief, “but to create a visual counter-point”. Happily, nothing seems to be lost by hearing the songs in isolation, as The Waiting Room is another immensely satisfying collection from a band always able – even after personnel upheavals – to explore multiple styles while remaining ineffably themselves.

Follow Me, one of several instrumentals, the lone melodica quoting an old Hollywood love theme, lights the entrance to the album’s compellingly shadowy soundworld, along with Second Chance Man. Staples’ voice, swimming here under swirling chorus, is accompanied by warm electric piano and bass, which picks up the pace in the second verse, ushering in the first of many excellent brass parts – horns stabbing, playing off the vocal melody – arranged for the band by British jazz notable Julian Siegel. On Hey Lucinda they growl, underscoring the answers to a supplicant Staples’ pleas to “come out tonight”, in a duet recorded in 2009 with the late Lhasa de Sela, lost to cancer in 2010. The band understandably have struggled since to do the song justice, but the end result is a wonderful, twinkling thing, shot through with sadness and humour, and one of many highlights on the first side.

Were We Once Lovers? is an up-tempo remembrance of pain past – a desperate soul trying to recall a half-forgotten paramour (“Did I take your number, did I call?/Did we spend our lives together, can’t recall…”) – riding on sombrely slapping and popping bass; a disco anthem for the terminally romantic (“How can I care if it’s the caring that’s killing me?”). Help Yourself, meanwhile, is a propulsive Afrobeat-sounding jam with more superb brass: Curtis Mayfield soul sprinkled with Augustus Pablo echoes.

Pleasures wait in the second half, too: How He Entered is a spoken story, its cinematic illustrations of a starry-eyed loafer “in an ill-fitting suit” straight out of Jim Jarmusch or Aki Kaurismaki. Delivered over a sparse piano and string motif, it’s rich with imagery: “This is how he entered/Like a lost dog holding his missing poster, just to be sure everyone knew just how lost he was”. Following this, the title track, among their starkest, is a vocal and organ piece almost bereft of all hope: “Just make it quick, boy/Put your love aside,” sings the room’s inhabitant, “Don’t let me suffer”.

To close, there’s another excellent two-hander, We Are Dreamers!, with Savages’ Jehnny Beth on terrific form, reining in the Siouxsie-isms , adding tension and portent, and a final Like Only Lovers Can. It’s the kind of reflective, lush – in both luxuriant and soused senses – ballad Tindersticks do so well. “I think it’s the one song, out of all the songs on this album,” Staples has quipped, “that we may have made before.” Long may they continue to do so.