Tired Pony – The Place We Ran From 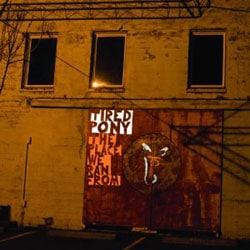 It must be a weird state of affairs in the music industry when the number of so-called ‘supergroups’ formed increases year-on-year. Whilst most people think of Jack White, who is currently rotating three bands on the go, it will surprise some to learn that Gary Lightbody has also been involved in his fair share of musical projects. Aside from his day job in arena-filling indie rockers Snow Patrol he also formed the Scottish revolving door troupe The Reindeer Section in 2001 and released a couple of albums to some critical acclaim. Nearly a decade later, he’s been inviting yet more friends to start another band: Tired Pony.

This collective is mainly formed out of three areas. From Ireland is Lightbody alongside his long-time songwriting partner Iain Archer (who also helped out with The Reindeer Section) and world-renowned producer Jacknife Lee, whose recent production credits range from the dark electro of Crystal Castles to the more serene sounds of Regina Spektor. From Scotland is Belle & Sebastian drummer Richard Colburn (another founding member of The Reindeer Section). However, most attention will be drawn to the lineup additions from Portland, Oregon, USA: Peter Buck of R.E.M. alongside long-time collaborator Scott McCaughey. All things considered, it’s a pretty impressive array of wide-ranging talents.

However, for a cast list that star-studded, the collective’s debut album The Place We Ran From falls short. The curse that has plagued Snow Patrol after Final Straw – dull, middle of the road and lengthy trips into meandering territory – is still lingering about on tracks like Held In The Arms Of The World. It’s easy to understand what they’re trying to do but it doesn’t need nearly seven minutes to achieve its objective. I Am A Landslide and Get On The Road, the latter with guest vocals by Zooey Deschenel of She & Him fame, similarly don’t set hearts racing.

It’d be so easy to write this off as an album of Snow Patrol out-takes, but that would be overlooking the fact there are some brilliant moments here. Dead American Writers is direct, to the point and rather jaunty – ideal for a lead-off single. The Good Book, which sees Tom Smith of Editors supplying lead vocals, is rather compelling and album closer Pieces is tense, ending in a sea of feedback. More than anything, it shows that Gary Lightbody can still write a decent tune or two, even if the quality isn’t as consistent as one would hope it to be.

The results of The Place We Ran From are ultimately pretty mixed. To start with the positives, it is a lot of better than expected and there are some genuinely decent pieces of songwriting. However, to enjoy those you have to wade through a thick fog of filler that either doesn’t really go anywhere or just doesn’t connect. Given the talent on display there is so much more that they could potentially give. A second album might be tantalising and intriguing but only if more care and attention is given to their overall material.