Titus Andronicus – The Most Lamentable Tragedy 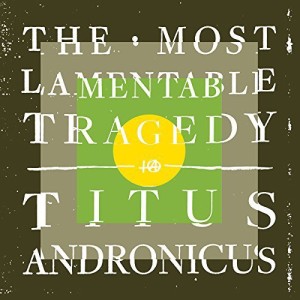 Titus Andronicus have never done things on a small scale; this is, after all, a band whose 2010 album The Monitor was a concept work that used the American Civil War as a metaphor for main man Patrick Stickles’ life.

It is perhaps no surprise then that the latest effort from Titus Andronicus is an ambitious affair. The Most Lamentable Tragedy (or Tumult to its friends) is a 29 song album that stretches to a surprisingly swift 92 minutes whilst telling the story of a man who meets his own doppelganger. Stickles uses the tale (which involves dreams, past life regression, and drug use amongst other things) to explore the nature of manic depression, and although it’s essentially a work of fiction, much like The Monitor (and Local Business), it’s clear that Stickles has poured himself into this album.

Concept albums can be something of an oddity, and they are often viewed as something of a folly or as ridiculously pretentious and not with reason. Rare is the concept album that actually works, rarer still is the concept album that remembers that it’s the songs that matter most, not the concept. Where The Most Lamentable Tragedy succeeds, for the most part, is that it is quite possible to forget about the concept and themes and become immersed in a record that is filled with storming rock tunes. As the album progresses it touches on punk, new-wave, church music, rock, irish balladry, lo-fi folk, and stadium sized bombast, but it is far from a grab bag of genres smashed together to keep everyone happy, there’s heart and soul in every tune here. Perhaps the greatest success of the album is the fact that it is as possible to hear the likes of I Lost My Mind ([email protected]) as nothing more a big rock tune and ignore its depiction of a decent into mental illness. To do so is to miss the point of the album perhaps, but for those who just want an album full of towering tunes, the underlying story does not get in the way.

Titus Andronicus has often taken deep rooted neurosis and married it to stadium sized songs, and TMLT is no different. Fatal Flaw for example is a colossal song that marries The Clash to Bruce Springsteen. Yet underneath the propulsive pop nous is a smart take on the legalised drug dealing. It’s like Waiting For The Man, transposed to a local chemist. Come On Sibohan grabs Irish influences and runs wild in the streets, with fiddles providing a jaunty edge, it’s a sound that the band returns to often most notably on the epic lament of More Perfect Union, which is almost an opera on it’s own. Dimed Out is a head down punk charge that feels barely under control, it’s an invigorating blast, but also slightly disturbing in its wide eyed thrashing. Mr E Mann is not only a clever self-referencing tune, but also tips its hat in Elvis Costello‘s direction.

Elsewhere there are what seem to be barely thought out ideas thrown into the mix, Look Alive for example lasts a mere 34 seconds and quickly spits its message out “I look alive, but inside I’m dead”. Similarly, Lookalike is a blink and you’ll miss it punk explosion. There are also two moments on the album where there’s nothing but silence (intermission and seven seconds) which seem to do little, but in the context of the album these sections make complete sense. On the one hand they serve as exposition and give the sense that a rock opera is playing out, but the constant switches of pace and musical direction are indicative of the protagonists state of mind. Manic depression is not just about the lows; there are dizzying highs and flurries of creativity and these are represented in the construction of the songs and the running order of the album. It’s noticeable in Stickles’ hand written lyrics and notes too, which often appear to have been written by several different people in varying degrees of mental state.

Mere words cannot do this album justice; it operates on so many levels, and does so impressively. The concept element works brilliantly and rewards dedicated listening. Dig into the album’s heart and you’ll find smart call backs to the band’s earlier work nestled alongside heartfelt explorations of mental illness and the very nature of what it means to be human. That such a dense and ambitious work also contains a high hit rate of brilliantly executed songs is astounding. This is without doubt the band’s best and most effective work to date.