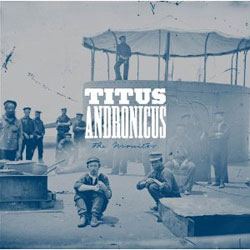 As is quickly clear from even a cursory listen to their music, Titus Andronicus are a band from New Jersey. Their smart blending of punk’s passion with a more literate, reference-infused lyricism first came to public attention with 2008’s debut album The Airing Of Grievances and they return now with its follow-up, boasting not only an overreaching concept, but also some of the longest song titles of the year so far.

The album is themed around the American Civil War, and is named after the first US iron warship. Rather than just baldly telling war-related tales, the band take a more interesting tack: drawing analogies between historical and personal emotional conflicts or relationship woes. When they sing “Nothing means anything any more” on A Pot In Which To Piss, or talk of white flags and burning villages, these are clearly metaphors for personal havoc wreaked. This is more directly expressed as well, with bitterness, pessimism and ire: “All I want for Christmas / Is no feelings” on No Future Part Three: Escape From No Future, or “You’re not the only one that thinks that life is so cruel” (To Old Friends And New).

Several lyrical couplets stand out as particularly arresting and/or clever. It isn’t every band that could – convincingly – rhyme “humanity” and “faeces” as here, on No Future Part Three. The Battle Of Hampton Roads asks, to devastating effect, “Is there a girl at this college that hasn’t been raped? / Is there a boy in this town that isn’t exploding with hate?”. The neat “I never wanted to change the world, I’m not looking for a new New Jersey / But tramps like us / Baby we were born to die” in the opening track manages to simultaneously pun on Billy Bragg‘s New England while giving a nihilistic slant to Bruce Springsteen‘s Born To Run – a sly nod to The Boss’s undoubted influence on their sound. Springsteen is again referenced in The Battle Of Hampton Roads’ angry, defeated “I’ve destroyed everything that would have made me more like Bruce Springsteen”. The whole of Theme From Cheers, too, has the atmosphere of a Springsteen-style “let’s escape from this small town” number.

Interspersed with the music are several spoken extracts, which often sound like portentous, declamatory orations. The album is opened with a speech-maker announcing: “All the armies of Europe and Asia could not, by force, take a drink from the Ohio river”. It is hard to tell if this is meant ironically or seriously. If the latter, it contributes to a slightly uneasy sense of jingoism, although this could very well be an unfair charge if the intention is satirical.

A similar device is used in Titus Andronicus Forever, A Pot In Which To Piss, and …And Ever; and if nothing else these contribute an interesting change of pace and direction to the album; which is further enhanced by the length, and changeable nature of the individual tracks. Although A More Perfect Union, the exuberantly-titled Richard II or Extraordinary Popular Dimensions And The Madness Of Crowds (Responsible Hate Anthems), and To Old Friends And New could also work as stand-alone songs, nearly all the others take so many twists and turns of pace, style and melody that it is frequently difficult to distinguish where one finishes and another starts. Thus this is an album that is undoubtedly best listened to as an album.

The occasional overlong segment of a song (The Battle Of Hampton Roads) and self-pitying tone and vocal that skate a little close to “emo” (No Future Part Three…) are really the only complaints that can be levelled. This very American, sometimes Irish-American sounding album, funny, occasionally scabrous, occasionally angry but most often simply passionate, is one of the smartest and most intelligent punk releases in a while, and one of the most enjoyable too.