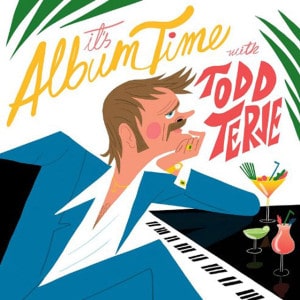 Norway’s dance music scene has been notoriously lacklustre during its sojourns to Blighty. Black metal and frontier-shattering pop forays (á la Annie) tend to be the nation’s biggest sonic exports, and the ones that brandish the weightiest clout on our shores.

Okay, so there’s Röyksopp, but they duck ‘n’ weave through so many genres it’s unfair/inaccurate to just pigeonhole them as one singular thing. The singular Norwegian delegation of dance, at least in the public eye and in mainstream charts, is ambassador Todd Terje.

Terje, famous for his potent blend of ’80s nu-disco, dance-pop and Ed Banger-worthy electro-funk, has been truckin’ since the blurry halcyon days of the early 2000s. It’s Album Time is miraculously a full-length from the DJ/producer once dubbed ‘The King Of Summer Jams’. It’s miraculous because in the decade(ish) since he bounded into our periphery, he’s not released an LP of his own. Even ruddy Basshunter had a record (or five). So, tongue firmly smooshed against cheek, he slapped a knowing wink to that belatedness across the front cover for the title.

Recorded over a three year period spanning 2012-14, It’s Album Time contains a few cuts you may be familiar with already. Inspector Norse, for example, sits at the foot of the record as one final hurrah before the party stops. Squirming into focus with rollicking, simple bass and snare patterns, Terje provides a basis from which to blow our minds. It’s a sprawling seven-minute French house ditty, with a few glassy garage synths and eurodance basslines, slowly evolving and unfurling like a tortoise awakening from hibernation in the spring. It’s oversimplifying the track to just compare it to something by Daft Punk, but there is a resemblance in the electro-funk melee.

It’s an uplifting album on the whole, with nary a moment to writhe in self-pity or depressing locales. And it is, first and foremost, a party record. Terje may have a particular schtick he enjoys spending time with, and you’re unlikely to marvel at his avante-garde streak on It’s Album Time, but that’s a gorgeous aspect. There’s no smug, bloated-chest pretension or adventures into virgin territories. Terje’s focused his time and energies in making his première record a rip-roaring hoodang, stuffed with frivolity, festivities and a teensy-weensy smidgen of sensual glamour. There’s a coquettish splurt throughout the noise, nothing too sexy, but an ankle-flash of intimacy every now and again to add depth into the otherwise ironclad hedonism.

Take the languorous Preben Goes To Acapulco, with rhythmic bass plods and twinkling, triumphant shimmers. It’s decisive and powerful, driven by thrusting bass synths. There’s not as much overt screeching revelry, and you get the sense that it’s a cut reserved for locking eye contact with a prospective beau/belle until your faces melt into one. Delorean Dynamite’s another gloopy spoonful of sound that’s the aural equivalent of ’70s elegance. It’s definitely an aged, vintage tone Terje employs, and not exactly the ’80s one you might expect – though that’s up for debate – but he still ignites a bonfire in your loins and a kinetic tic in your hips, knees and toes. It’s all silver washes and glamorous funk axes and locomotive beats that slide you into a gleeful coma.

So the big, major question on everyone’s lips at this stage has got to be: was it worth the wait? To which we’d have to answer: hell-to-the-yeah. This is an exemplary dance record with scant, if any, flaws and heavy dollops of European groove. It’s a broad net Terje casts here, flitting through myriad styles but he always ensures they’re congealed in order to give the record a cohesiveness and rigidity. It’s built from the ground up as a sun-hickeyed beacon of glory, and even the comparative reverence on Bryan Ferry x Terje covering Robert Palmer ‘s Johnny And Mary does little to dampen the mood. This summer will be pockmarked with those having a good time, and those having a Terje time. It’s obvious which group you’ll want to hitch your wagon to.