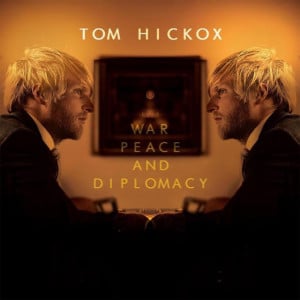 Tom Hickox’s lyrical qualities have been compared to those of Leonard Cohen, and for good reason: both artists can conjure an image, upend a cliché, and turn the oft-lowly perceived realm of lyrics into poetry. One difference is Hickox’s material leans more topical and political, but for an album named War Peace And Diplomacy, there’s scarce preaching, only nuanced songs full of poetic imagery with lush instrumental backing.

The music style makes biographical sense: Hickox’s late father was conductor Richard Hickox, Commander of the British Empire and man of excellent taste. It seems the apple fell very little distance, for much of Hickox’s music draws inspiration from a pre-rock era; film scores, Bing Crosby-murmured ballads, and those beautiful wartime songs like We’ll Meet Again. There are modern touches, however, with production that recalls later Brian Eno, and echoes of country, Britpop, and every other genre that can pluck the heart strings. Rest assured, they will be plucked.

Let Me Be Your Lover is a song which features lines every love-stricken human being wishes they could pen, if only to tell their love these lines: “Let us share a tombstone in a graveyard by the sea/ then let us hear the crushing in immortality/ let me be your lover, let me be your friend/ let me be beside you whenever it’s the… end.” Muted horns moan in the background with the orchestra, a great swell of sadness moving around the listener. The Pretty Bride Of Russia has Hickox singing from the perspective of a young girl looking to go to London: “I’ll learn to act and sing and make my father proud.” A small orchestra moves the emotion along, undertowing that voice.

To describe Hickox’s voice is an exercise in image comparison. Utterly unique, it fluctuates, croaks, and croons in an unmistakable North London accent, conjuring up smoky pubs and music halls alike, as if Josh Groban has been hanging out with Tom Waits and is splitting the difference. In White Roses Red, swooping strings in minor keys move forcefully across a wall of sound while Hickox gives an intense vocal performance, all screams and utterings in the same sentence. It is here his diction, phrasing, and talent in singing really shine.

In politics, Hickox wisely avoids tackling divisive topics head-on, and instead centers on the human element. No sloganeering here. A Normal Boy is a heartbreaking portrayal of a young man falling into the lure of terrorism. “I want to do what’s right/ I want to carry the fight/ ‘cause I’ve seen a light,” he repeats over and over as the music grows more chaotic, successively showing the aggression and chaos within. Out Of The Warzone describes death in vivid terms, to a tune more more appropriate for romance. This choice isn’t mere irony or satire. When he sings, “My soul is floating away out of the warzone,” no trace of detachment is found, just sweet release.

As Hickox himself says, “I am a great believer in the listener finding their own way. I have failed as a writer if there’s only one interpretation of the lyrics.” For music that moves the soul, you can surely do no better. War Peace And Democracy is a masterwork, demanding repeated listens and sure to spark endless musings and study. And why not? Containing both sobriety and humour, beauty and the grave, Tom Hickox has created a modern classic, a must-have for all those who wish to feel.