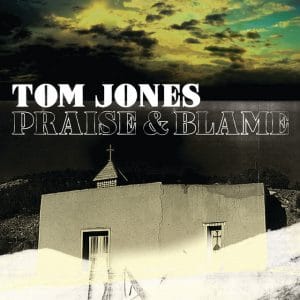 Let’s call it ‘doing a Johnny Cash‘. Artist of a certain age hooks up with a ‘name’ producer to record an album of stripped down cover versions, leading to both critical acclaim and a whole new audience.

Just in time for his 70th birthday, that’s what Tom Jones has decided to do, hooking up with Ethan Johns (who has worked with the likes of Ryan Adams, Kings Of Leon and Laura Marling) to record an album of blues and gospel songs.

The inevitable parallel is that of Cash and Rick Rubin’s staggering American Recordings albums, but where Cash’s life of heartbreak, tragedy and drug abuse meant those songs were imbued with a sense of gravitas, Wales’ favourite son has always been regarded as something of a kitsch figure who’s probably most famous for having an awful lot of underwear thrown at him.

So, expect a few cynical eyebrows to be raised. Yet, against the odds, Praise & Blame more or less works brilliantly – it’s certainly a much more convincing sound for ‘Jones The Voice’ than 24 Hours, his rather ill-advised collaboration with Future Cut, was.

Johns’ masterstroke is to bathe the album in a ‘classic rock’ style, and allow Jones’ famous voice to let rip. At times, it’s all a bit too reverential and portentous, but at its best, Praise & Blame is unexpectedly both exhilarating and touching.

Burning Hell, the John Lee Hooker classic, is simply extraordinary – Jones doing vocal battle against some blistering blues guitar to visceral effect. It’s more exciting than any septuagenerian has any right to sound. Lord Help is in a similarly barnstorming style, with Jones sounding like he’s having the time of his life.

The more restrained moments work equally well. Did Trouble Me has a lovely bluegrass feel, reminiscent of Robert Plant and Allison Krauss‘ recent work, while What Good Am I pulls off the rare trick of improving a Bob Dylan original. It’s the sound of a man looking back on his life, and there’s a poignancy and melancholy that hangs heavy, to terrific effect.

Admittedly, there are moments that slip into Later… with Jools Holland territory – Strange Things even features a boogie-woogie piano – and the gospel stylings of Didn’t It Rain comes across as a tad pedestrian. Inevitably, given the source material, there’s a lot of lyrics about God, religion and spirituality, which may put some off, but it never pushes any views into the listener’s face.

The Cash comparison crops up at the end too, with a vibrant version of Run On, the traditional folk song popularised in recent years by Moby and covered by Cash on American Recordings V as God’s Gonna Cut You Down.

For a man who’s tackled many different styles in his career, this new direction shouldn’t come as a surprise, but it somehow does. If you’ve never even considered owning a Tom Jones record before, give Praise & Blame a try. It may well surprise you.