Tom Jones – Spirit In The Room

by Daniel Paton
published: 21 May 2012 in Album Reviews
Tweet 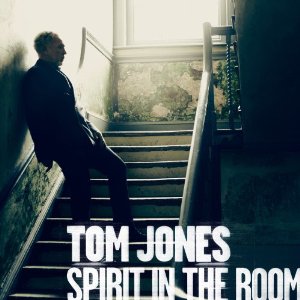 Song selection, say the judges on UK talent show The Voice, is all important. This appears to have been a lesson it has taken Tom Jones, one of these said judges, some time to learn. For every wonderful interpretation (Kiss), there has been a What’s New Pussycat, successive collaborations with one eye on the marketplace, or some uncomfortable novelty abomination (Sex Bomb). For too long, his self-important bellow had two default settings – very loud and unsubtle, and even louder and even less subtle. So 2010’s Praise And Blame came as a quite glorious surprise – an intimate but gritty album of roots music on which Jones’ true abilities came to the fore, along with a new sense of nuance.

Spirit In The Room is a deliberate follow-up aiming to repeat the trick, continuing his fruitful working relationship with producer Ethan Johns. Whilst it lacks some of the fire and brimstone that characterised its predecessor, it’s arguably an even more exposed affair. For much of the album, there is a stark emphasis on acoustic instrumentation – and Jones’ powerful voice is captured dry, without reverb or effects, allowing new levels of empathy and vulnerability to creep in. No longer does it feel as if Jones is using his vocal prowess as a weapon with which to beat an audience into submission. At the age of 71, he is making the songs his own.

Sometimes this is no mean feat, not least on the opening take on Leonard Cohen’s Tower Of Song. This is a remarkable work – among Cohen’s very best songs – but it is so closely associated with its writer’s mordant wit and dry irony. No longer able to draw a laugh from the line “I was born with the gift of a golden voice”, Jones plays the song straight – and it sounds completely convincing, and very haunting.

There is an even bleaker moment with a surprisingly authoritative and imposing take on The Low Anthem’s Charlie Darwin. Ben Knox Miller’s falsetto on the original tugged at the heartstrings and rather softened the song’s despairing mood. In Jones’ baritone vibrato, it is both mesmerising and profoundly unsettling. Astonishingly, it manages to sound restrained and minimal even with the addition of a full choir.

There are some blues selections too, harking back to Praise And Blame, on which Jones sounds supremely relaxed and confident. His precise articulation and intelligent phrasing are brilliantly exhibited on Odetta’s Hit And Miss (on which he addresses the need to be individual) and on Blind Willie Johnson’s Soul Of A Man. It’s so refreshing to hear Jones exercising some real dynamic control on Lone Pilgrim, a song he completely inhabits.

There are a couple of moments on Spirit In The Room which, whilst not exactly bad, feel perhaps a little contrived. There seems to have been a conscious attempt to keep things current, which perhaps explains the somewhat rushed versions of Tom Waits’ Bad As Me and Paul Simon’s Love And Blessings (both from those artists’ most recent albums, issued only last year). Jones imbues them with vitality and strength, but the arrangements don’t veer too radically from the original templates.

Nevertheless, these are compensated for by some sensitive, thoughtful choices. Jones turns Richard and Linda Thompson’s beautiful Dimming Of The Day into a song of desperate longing. The take on Bob Dylan’s When The Deal Goes Down, aside from being pointedly age-appropriate, is woozier, presenting the brilliant paradox of Jones’ valiant certainty against a more uncertain, insecure musical backdrop. With this album and its predecessor, he has achieved a genuine gravitas and, more importantly, a believable honesty.