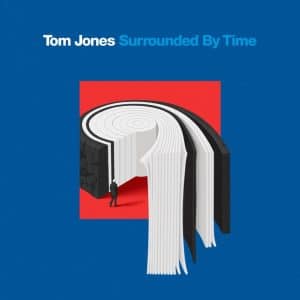 When you’re a national institution in your 80s, it could be easy to stop taking risks. Yet if you’ve heard a single minute of Surrounded By Time, the first album from Tom Jones in just over five years, you will have deduced that he does not intend to spend the rest of his life in comfy slippers.

The word ‘artist’ is used frivolously on talent shows, but Jones is the real deal, a genuine artist who has seen it all from both sides of the camera. Surrounded By Time draws on that wealth of experience, choosing songs ready for interpretation by the famous Welsh pipes. None of the songs are obvious picks but they carry great significance for Jones, with interpretations that have been in the making for as long as 50 years. It is remarkable to think that his version of I’m Growing Old has been on the table since Jones first encountered it in 1972.

When you hear the originals and compare them to the finished articles after Jones and regular collaborator Ethan Johns have worked their magic, the results are startling. This is music borne of raw inspiration, intense learning and hard, experienced graft, the songs hitting the listener square between the eyes. The more stripped back the textures, the more Jones rises to the challenge to become all the instruments on the song. The harder the subject, the more intensely he sings about it.

There could hardly be a better example than I Won’t Crumble With You If You Fall, the song by Bernice Johnson Reagan with which the album begins. Pitched in at the emotional deep end, Jones is wholly honest as he keeps a promise to his late wife Linda. She made him promise to carry on singing and thinking of the good times, and the line “I won’t crumble with you if you fall” is given with great strength of resolve but also with a humbled air, Jones singing with effortless vibrato.

Linda, it goes without saying, would be immensely proud of what follows – perhaps even alarmed. No Hole In My Head is quite simply one of the most thrilling songs of the decade so far, delivered with fire and brimstone. It doesn’t take a leap of the imagination to see Jones in the studio, flicking the Vs as he sings ‘there’s no hole in my head – too bad!’ This song, a relatively frivolous composition from Malvina Reynolds, becomes a thrilling riposte to generations written off. A personal involvement bubbles on the surface, complemented by the psychedelic backing.

Talking Reality Television Blues is just as striking but with a wholly different form of delivery. It is a compelling companion to the late Gil Scott Heron’s The Revolution Will Not Be Televised as it dispenses the history of reality TV. Michael Jackson is spoken of in affectionate tones, Donald Trump less so, before the song winds up in a swirl of guitars.

Producer Johns, with whom Jones has worked for a decade, delivers some memorable instrumentation with the band. The spooky One More Cup Of Coffee is worth its 43-year wait, Jones finally committing his take on Bob Dylan’s original to record with a spooky accompaniment. Samson And Delilah shuffles along with some brilliant ‘miaow’ noises from the guitar, the femme fatale trying to entice her man to cut his hair, thereby losing his strength.

Old Mother Earth feels its age, its slow but emotionally loaded piano introduction simple and devastatingly effective. “Yes, I’m growing old,” acknowledges Jones with candour in the song of the same name, before refuting that with a remarkable account of Terry Callier’s Lazarus Man. Jones could easily be referring to his career here, but holds a high level of intensity through its eight minutes.

Not all of the songs are quite as successful. Windmills may well divide opinion, channelling just a little of the Tom Jones of Thunderball (but not too much!) as he turns the volume up against some typically imaginative backing. Pop Star has lots of echo and bluster, and a little less emotion.

These are small points though, for Surrounded By Time is nothing like a standard covers album. It is more a series of songs that Jones and his cohorts have taken into the repair shop, stripped down to the bare bones, and rebuilt in the shape of their new front man. It pays to listen to the originals, to form a full appreciation of just how much Jones brings to the table in each interpretation, expressing more emotion than he probably has at any point in his career. The instrumentation is the icing on the cake.

In a recent interview with musicOMH (coming soon…), Jones spoke of a dream where he was supposed to live to the ripe old age of 97. If he can continue recording until then, the pleasure will be ours – for this is an artist who refuses to lie down and accept the advance of time. Jones’ attitude is the complete opposite, and we are the beneficiaries of his wisdom, warmth and frankly alarming invention.