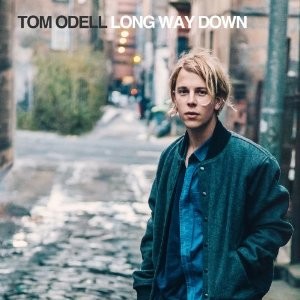 It would be fair to say that there is a significant amount of hype surrounding 22-year-old Tom Odell, from Chichester. He has featured in the long list for the BBC Sound Of 2013, had one of his songs – Another Love –  used to advertise the Beeb’s 2013 schedule, won the BRITs Critics Choice Award, appeared in numerous other ‘ones to watch’ lists, closed the Burberry show at London Fashion Week and featured in Comic Relief.

It is not hard to see how Odell has found himself on an irrepressible upward trajectory to pop stardom. He’s young, rakishly good looking in a slightly disheveled way and writes piano driven songs about being in, out and looking for love. He looks as comfortable sheepishly talking about his initial success on the news as he does at the end of a catwalk surrounded by fashionistas.

It would be easy to dismiss all this as an industry fueled bubble, destined to burst in the same way as thousands of other young musical hopes and dreams. Yet on the contrary, from the evidence of Long Way Down, Tom Odell is the real deal – a modern songwriter who may be as much a commercial product as an artist but has the talent to match his appeal.

Long Way Down is, in essence, about love. Not surprising considering Odell’s tender years and the way affairs of the heart have been the key fodder for songwriters for generations. He’s told journalists that the inspiration for his lyrics comes from his “inability to hold a relationship with someone for more than six months”, which seems a bit dramatic, but explains the content on much of the album pretty accurately.

When he is crazy about someone, Tom Odell seems like a pretty nice guy. Grow Old With Me is a delicate, sentimental song about being with someone forever and the everlasting power of love. It has a hint of Billy Joel about it, through both the ballad and the piano although Odell’s voice has more of a quiver to it than Joel’s smooth delivery.

Hold Me has a similar sentiment, but has more of a music hall air. The piano calls The Waterboys to mind – no bad thing – and Odell sings about the dizzying effect of falling in love with youthful authenticity. His voice pitches somewhere between James Walsh of ’90s troubadours Starsailor, Chris Martin and Jeff Buckley.

Those six month stretches don’t last long though. Much of Long Way Down is positively dripping with angst. Another Love, the standout track, is an ode to frustrated emotion, artfully constructed; and it’s the first time that Odell shows some real passion in his music. He channels Chris Martin on Sense, just him and a piano: “If I fell in love a thousand times, would it all make sense?” Probably not, Tom; but that won’t stop us enjoying the result of you finding out.

There are songs on this album that signify Tom Odell’s intent as an artist, too. It’s not an easy thing to write sentimental authentic ballads that have mass appeal. Odell says that Goodbye Yellow Brick Road was one of the first albums he ever heard, and the influence of Elton John on his music can’t be overlooked. Live he has the same urgent, animation of the guy who is stuck on a piano stool but can’t help but move, and songs like Sirens, Till I Lost and I Know build from simple beginnings to finish in grand, stadium sized crescendos, surely where they will be heard in the not too distant future.

The most impressive thing about Long Way Down is how, despite being an album based on a simple, almost naïve set of concepts – being in love, falling out of love, the raw emotion of being young and not understanding the world yet – it sounds accomplished well beyond Odell’s years. Proof that, on this occasion, it is worth believing the hype.