Tom Waits – Bad As Me 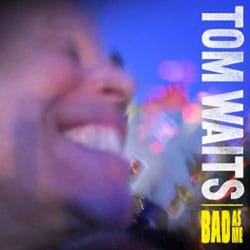 It starts with a full-throated roar of “All Aboard!” and ends with a rendition of Auld Lang Syne. In between there’s gin-soaked ballads, swampy blues, several appearances from Keith Richards, gunfire and explosions, and lording over it all, that incredible, 60 cigarettes an hour, croak of a voice that has cast a spell over all who’s heard it for the past 40 years.

It is, of course, Tom Waits first studio album in eight years, and his 17th overall. There aren’t that many artists who can remain relevant and vital well into their ’60s, but like his closest contemporaries Dylan and Cohen, Waits more than manages it.

For a man so renowned for experimentation though, Bad As Me sounds strangely familiar and even (whisper it) accessible. It’s certainly not as utterly terrifying as Bone Machine could be, nor as sprawling and ambitious as classics like Rain Dogs. Yet when he’s on form, which he is on many tracks on Bad As Me, Waits can still be utterly spellbinding.

All sides of the man are on display here. Chicago hurtles off at full speed like a runaway train, horns blaring loudly while Waits muses whether “things will be better in Chicago” before bellowing “All Aboard!”. He pulls a similar trick on the title track, a gloriously shuffling bluesy rant of a song with Waits switches between sounding utterly hysterical and laconically laidback.

Yet we also find Waits at his most affecting on this album. A master at the heartbroken ballad, there are some wonderful examples here of his softer side. Last Leaf is impossibly poignant, the sound of a man raging against the light: “I’m the last leaf on the tree, the autumn took the rest but it won’t take me”. The appearance of a somewhat croaky Keith Richards on backing vocals adds to the melancholy atmosphere.

Pay Me is, if anything, even more gorgeous – a beautifully woozy ballad on a par with his early days of Closing Time. There are other traditional bar-room lullabies here: the beautiful Kiss Me and the Spanish-flavoured Back In The Crowd, and they provide a nice contrast to Waits’ more hollering side.

Lyrically, he touches on everything from the financial crisis to war. Talking At The Same Time (which, musically, sounds like Heartattack & Vine remade for a David Lynch film) is a thinly veiled attack on bankers: “we bailed out all the millionaires, they’ve got the fruit, we’ve got the rind”).

Most extraordinary though is Hell Broke Luce, which sounds like a missive from Hades itself: a militaristic marching song, with Waits angrily rapping over the top about Iraq, generals, and body bags. “What the hell was it that the President said? Give them all a beautiful parade instead…left, right, left, right” he yells while gunfire and explosions sound all around. It’s Waits at his most utterly compelling.

And then, just because he’s Tom Waits and can do what he wants, he can produce a jokey response to the Rolling Stones‘ Satisfaction in Satisfied (“Now Mr Jagger and Mr Richards…I will scratch where I’ve been itching!”) or produce a bone-rattling blues song that references Love Me Tender with Get Lost. The album closes with a nod to his past again in New Year’s Eve, throwing a rendition of Auld Lang Syne towards the end of the song, just as he did with Waltzing Matilda in Tom Traubert’s Blues.

At 61 years old, and several classic albums under his belt already, Tom Waits has nothing left to prove. The fact that he can produce an album like Bad As Me, with more energy, invention and sheer excitement that artists half his age stands as testimony that Tom Waits remains one of the true giants of music.