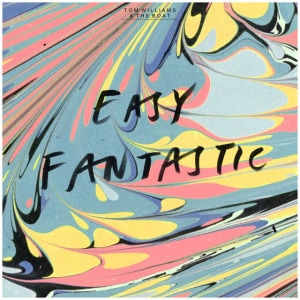 On the front cover of Tom Williams And The Boat’s first album, 2011’s Too Slow, there is an image. It shows a young man holding a guitar, head turned bottom-left and mouth far from the mic, as if he’s lost in the feeling of it all. On his t-shirt is a reproduction of cult hero Daniel Johnston’s album cover Yip! Jump Music, and the strangely sketched Casper The Friendly Ghost that Johnston’s been obsessed with since forever.

It makes sense. Johnston, with his personal musings and DIY attitude, is one of indie rock’s inspirations. Williams belongs, pardon the pun, in the same boat. “I love songwriters who sound like themselves”, said Williams in an interview, “Neil Young, Elliott Smith, Stephen Malkmus.” Easy Fantastic, TWATB’s (great band name acronym) third album in as many years, shows a band moving away from its quieter, Elliott Smith-esque offerings of yesteryear to a predominantly visceral and rock-ish sensibility, a la Pavement’s Crooked Rain, Crooked Rain, and pulling it off.

Track one is a blast of country-inspired magic called Hurricane. The opening calls to mind, strangely enough, mid-’00s KT Tunstall, along with stoner rock icons Queens Of The Stone Age: “Was at the centre of a hurricane/ drinking ice tea/ I was pretending to be you/ and you were dressed up as me.”

Forever Man shows Williams’ vocal range, a falsetto clean and full that sells lines like “I want to be forever man,” over and over in a song not far beyond post-Laura Marling Noah And The Whale. I Want You, the second track sharing the same name as a Bob Dylan classic, is a beautiful song in its own right. The mixing and instrumentation evoke R.E.M. with more intelligible lyrics and smoothness, and a chorus with a hypnotic chord descent: “Oh, I love that ringing sound/ I love that ringing sound.”

A large part of the pleasure derived from Easy Fantastic is its lyrics. Splotches of humour and darkness entwine in ways that are affecting, never maudlin nor geared for shock value. For example, the first minute of Caroline contains vivid lyrics, reproduced in full:

And you would put 10 pounds on the full moon
and I’d put 20 pounds on you
but I’d take 200 from your handbag
when you were in the mirror, preening, worried that you’d
been taken for a fool,
but who’d ever take you for a fool?

And you had had a money making scheme
and I had had a travelling circus dream
and you had said, “sell your stuff in the newspaper
in the Friday ad,” and buy you something you’d never had.
It seemed that your parents were drifting apart
and everytime you started saving
you’d find an East London Bar.

In those two stanzas, over a funky driving bass, an entire story unfolds in the listener’s head, with a perfect balance between environmental specificity and emotional universality that makes it instantaneously distinct and appealing enough to fill in one’s own personal experience. Call it Portrait Of The Musician As A Young British Man.

Easy Fantastic is a realistic depiction of being in your 20s, your entire life ahead, but some unnamed thing lost. A portrait of first nostalgia and new love set to the background of urban London. One of Williams’ stated heroes, Elliott Smith, had tremendous success from creating the soundtrack to a generation’s emotional journey 20 years ago with the film Good Will Hunting. Perhaps Tom Williams And The Boat are poised to do the same. This is music you put on as you drive through pouring rain. Music you play to, quoting the film here, go see about a girl. Excellent.

Tom Williams and the Boat MP3s or CDs

Tom Williams and the Boat on Spotify