Tony Allen – There Is No End

by Matt Cotsell
published: 14 May 2021 in Album Reviews
Tweet 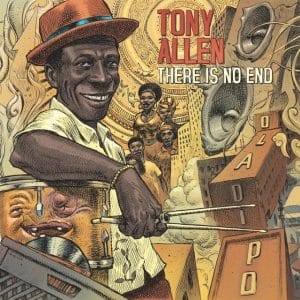 It’s witness to the universal appeal of his high life, afrobeat and afrofunk rhythms, that the esteemed bandleader and drummer Tony Allen somehow managed to persuade talents such as rappers Danny Brown and Sampa The Great, grime MC Skepta, Nigerian novelist Ben Okri and up and comers like Lava La Rue, Tsunami and Koreatown Oddity to guest on his final album. Thankfully, unlike the majority of posthumous releases, these are no sketches for his sweetheart, this album is a full blown love letter to the truest of his many passions: the boundless possibilities of collaboration within modern music. It feels like a passing of the baton onto the next generation.

Having come to prominence in the late ’60s and early ’70s as sticks man for Fela Kuti, he spent the following years traversing the globe in search of new ways to play and new people to play with, inspiring countless generations along the way. Aware that often the most vibrant music comes from the disenfranchised youth, this record was intended to give voice to the generation that have been most directly affected by the splintering world we live in. Perhaps it’s down to the reverence that the multitude of performers must have all felt for Allen, but this elaborate and accommodating record never feels angry or dejected, instead remaining celebratory and possessed of immense hope and exuberance.

On the first single Cosmosis Okri talks of “the music of the bones”, confirming that infinite melodies, complex and pure in structure were seemingly imbedded within Allen’s DNA, such was the ease with which he played and the inherent ability he had to nurture talents. Starting work with producer Vincent Taeger shortly before his passing, he connected the loop between the newest line of musicians and the didactic samples of his work that hip hop was originally built on, by riffing silently on headphones to protozoan beats in the studio, creating a new patchwork of scattering beats that act as an expressionist upholstery for the vocalists to bounce their vertiginous lyrics upon.

Credit has to go to Taeger for finishing the record so proficiently. Spiritually guided by Allen, it’s delightfully hard to pin down the album as any one thing, taking in as it does urban nihilism, sci-fi utopian poetry, shamanistic sermonising and drowsy psychedelic textures. As entertaining as the established performers are, it’s the lesser-known artists – Koreatown Oddity in particular – who impresses. Rapping about “satellites from different dimensions picking up signals”, he could easily have been referring to Allen’s almost supernatural powers.

Never content to hinge on traditional modalities, this surprisingly resilient and provocative collection reveals how Allen and friends triumphed against social barbarism and cosmopolitan functionality. As the title succinctly attests, there was seemingly no end to the late musician’s skill, and thankfully no end to the legacy he created for others to benefit from.