Toots And The Maytals – Got To Be Tough 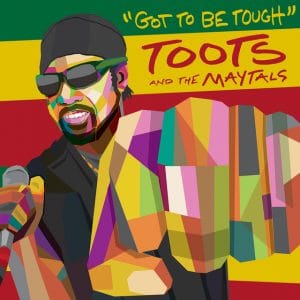 One of the pioneers of Jamaican music, but rarely given quite the same degree of spotlight as Bob Marley or Jimmy Cliff, Frederick ‘Toots’ Hibbert has crafted songs that have proved to be as enduring as they are immediate and enduring. Monkey Man, 54-46 That’s My Number, Pressure Drop , Funky Kingston, Just Tell Me, Do The Reggay, Sweet and Dandy – these are key texts of ska and rocksteady and some of popular music’s most vital singles.

A respected and reliable nostalgic festival act, The Maytals have arguably not been credited enough as an albums act, despite some impressive long form statements (not least Funky Kingston and In The Dark). Got To Be Tough is Hibbert and the flexible group’s first new album since 2010’s Flip And Twist and arrives close to 60 years after the band first formed. The story of The Maytals is one of impressive longevity.

The Maytals have always been an urgent and direct prospect, and Got To Be Tough continues these characteristics in its energy and urgency. It is a record compelled to speak against injustice, but which also comes with pride, determination and a positive perspective. It has a sleek, slightly processed contemporary sound which might jar slightly when set against the scratchy spontaneity of their earlier singles. Hibbert’s voice certainly sounds older, perhaps even a little weaker, but it still has a communicative power that sometimes allows it to sit at the forefront of the music.

There are some effective songs here, not least the inspiring opener Drop Off Head, the gospel tinged Freedom Train, the rhythmically agile Stand Accuse and the soulful and melodic Good Thing When You Call. The title track is perhaps the closest to the band’s rocksteady lineage, and also comes with the bite of political protest (“Our youth are getting slaughtered,” Hibbert proclaims in the chorus). Always a richly melodic act, there are strong hooks throughout, and some punchy and potent horn arrangements.

If a cover of Bob Marley’s Three Little Birds might seem like a needlessly obvious and predictable move, its transformation here into a palpably vociferous ska groove makes it sound more incendiary than reassuring. The subsequent Having A Party sustains the pace – these are tracks guaranteed to get any room dancing, should such a thing ever be possible again in a post-Covid world. It is perhaps something of a shame that the production smooths out any peaks and troughs, leaving minimal space for dynamics or surprise in the arrangements – but the album succeeds in creating a powerful band vibe regardless of this.

Whilst pleas for peace and unity are hardly innovative political statements, they sadly remain necessary. There is also something deeply satisfying and fulfilling about this album’s sense of community and belief that better times could still be ahead, particularly in the midst of this terrible year.

Toots And The Maytals MP3s or CDs

Toots And The Maytals on Spotify