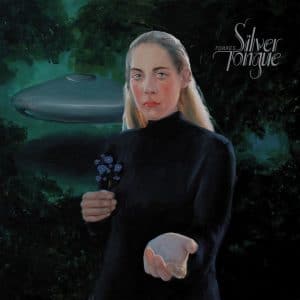 It’s fair to say that Mackenzie Scott, otherwise known as TORRES, has had a rough few years. Her third album, Three Futures, was her debut for 4AD, a personal dream come true for Scott who had long admired that label’s history. Sadly, Three Futures had modest record sales and she was unceremoniously dropped from 4AD.

Things were not going especially well in her personal life either, where Scott’s girlfriend was having an affair and it seemed like her relationship too was about to disintegrate. This all means that Silver Tongue, the first product of Scott’s new deal with Merge, has a vaguely cathartic feel to it – that old adage that, from great pain comes great art, has rarely felt truer.

Scott has always had a way with a eye-catching lyric (who can forget Strange Hellos’ opening couplet “Heather, I’m sorry that your mother, diseased in the brain, cannot recall your name”?), and that’s still the case on Silver Tongue. Opening track Good Scare reads like an open letter to her partner (“I had never seen that look from you before, you were eyeing all the exits”), although even through the heartache she manages to produce a wry smile: “You make me want to write a country song, folks here in New York get a kick out of.”

Musically, things are much as they have been on TORRES’ previous work – although for the first time, she’s completely self-produced the album. There’s still the slightly hazy air, the bubbling electronica, and big, soaring choruses. Sometimes, it sounds a bit harsh and jarring, as on Two Of Everything, but Last Forest pretty much redefines the ‘quiet chorus, loud chorus’ template to very pleasing effect.

There’s a chugging intensity to Good Grief that recalls PJ Harvey, which dismisses the idea of grieving over the end of a relationship, as “If I stayed away from all the places we have been together, I couldn’t go anywhere”. Again, Scott proves how expert she is at just casually describing heartbreak, even in the most mundane of things: “Now it hurts when I open the medicine cabinet and see your red lipstick”.

Given the subject matter, there’s also some understandably bitter sideswipes at her lover’s ex. On the aforementioned Two Of Everything, she addresses her directly: “It’s not my mission to be cruel, but she doesn’t light up the room when she’s talking about you… Does she also call you baby, you should know she calls me baby.” It sometimes gives a slightly queasy feeling of looking into someone’s diary, but the universal feelings of grief and rage are easy to identify with.

As the album draws to a close, the anger subsides and there rests an air of forgiveness and serenity. The standout track Gracious Day has a chorus of “I don’t want you going home anymore, I want you coming home” while the closing title track sees Scott pledging that “I’m heaven-bent on keeping you smiling”.

It’s a suitable end to an album that may not have existed at one point – Scott has talked about how she almost quit music after her experiences with 4AD. It’s a good thing she relented, as Silver Tongue is her most consistent album to date. Hopefully her new label will prove a more stable home for her.