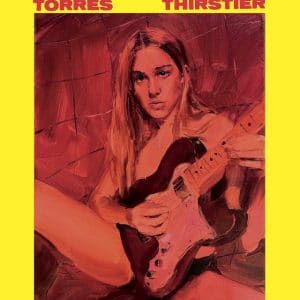 Mackenzie Scott, aka Torres, has had a bit of a stop-start pattern to her career so far. Seemingly on the verge of the big time when signed by 4AD, she was then unceremoniously dropped after the disappointing sales of her third album, Three Futures.

That ordeal seems to have been the making of Torres though. Her fifth album, Thirstier, follows a little over 18 months from her last album Silver Tongue, and she sounds better than ever. There’s a more playful side to Torres this time around (as a title like Hug From A Dinosaur would suggest) together with a willingness to jump around genres means that Thirstier is her best record to date.

The fact that Are You Sleepwalking crashes in with an almighty racket demonstrates Torres’ confidence. Thirsty may have been recorded under lockdown conditions during a global pandemic, but there’s no sign of edginess or depression on this album. That opener, like most of the other tracks, immediately grabs the listener’s attention. Despite the many squalls of feedback, it’s the song’s sense of melody that sticks in the memory.

For Scott certainly knows how to use an earworm effectively – Don’t Go Puttin’ Wishes In My Head is one of her most accessible songs, mixing shiny ’80s synths and some of the most impressive guitar shredding you’ll hear this side of Marnie Stern. The aforementioned Hug From A Dinosaur has a similar swagger to it, which despite the title is an uplifting love song about the joys of bringing your partner lunch when they’re too busy to fetch it themselves.

Long term Torres fans will be pleased to learn though that she’s not lost that trademark intensity either. Big Leap is probably the most minimal, low-key track on the album, but it accentuates Torres’ vocals in a very dramatic way. The title track is reminiscent of her second album Sprinter, starting off quiet and poised before exploding into a cacophony of noise for the chorus.

Kiss The Corners is the closest she’s ever come to producing a dance track, full of discordant electronica and urgent beats while closing track Keep The Devil Out even takes a turn into industrial rock, its noisy, guitar heavy chorus being delivered in an almost cathartic way.

There are moments which nod to Mitski, and others which are reminiscent of early PJ Harvey (which is unsurprising, given her long-term producer Rob Ellis is also Harvey’s collaborator). Yet what mostly stands out about Thirstier is how distinct Torres’ own voice is on it.

Some people may find the restless flitting between styles doesn’t for a coherent album, yet it somehow binds together these songs brilliantly. Mackenzie Scott seems to have reached that stage of her career where she’s just happy to please herself, and it’s resulted in her best album to date.