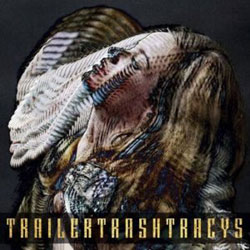 When, a couple of years ago Trailer Trash Tracys released acclaimed début single Candy Girl, the consensus seemed to part down the middle like some web 2.0 adaptation of the Red Sea. There were those who thought their atmospheric, haunting songs added something new to the musical landscape at the time, while others merely wrote them off as riding along on the coat-tails of the similar (and at the time very much on the up) The xx. With the hoo-ha surrounding the aforementioned The xx having long since died down, now is as pertinent a time as any for Trailer Trash Tracys’ album to be released and viewed on its own merits.

The comparisons are evident throughout the record, most notably on its production. The same woozy, nocturnal, walking-the-city-at night feel that permeated the former Mercury winners’ album. But that’s where the similarities end, with Trailer Trash Tracys’ effort taking on a more melodic direction, often using ’50s-indebted hooks that wouldn’t seem out of place on a Dreamboats and Petticoats compilation. These attributes are amply displayed early on in via the sumptuous Wish You Were Red and Dies In 55. On the former, the sparse arrangements give the song room to breathe, allowing the mournful vocals to take centre stage and chiming guitars to feature to garnish when required. On the latter, a sparkling organ line and tinny, space-y drums combine with a gorgeous tune to become the sonic equivalent of a foggy daybreak.

The way the basslines are key to the songs, rather than marginalised in the mix, evokes thoughts of New Order‘s propensity of giving the same treatment to those of Peter Hook and are most noticeable on the aforementioned Wish You Were Red, as well as the closing album-closing duo of Black Circle (courtesy of some fancy modulation) and Turkish Heights. The decision to use the bass as a surrogate low-end guitar not only opens up the songs and provides space for the other element but also allows for some bold arrangements, unbecoming of a début.

Cynics will point out that given that it’s been two years or so since Candy Girl was released the band should have developed and delivered an accomplished début album. True as that may be, it’s still no less welcome and refreshing to see they’ve delivered it. With Suzanne Aztoria’s haunting, dreamy vocals fronting up fuzzy, hazy pop gems, the record always feels accessible and but remains balanced with a sense of melancholia never far away. After finally stepping out on their own they appear to have hit the ground running, and have kickstarted their year delivering a cocksure record which welcomes repeated listens.