by John Murphy
published: 2 May 2014 in Album Reviews
Tweet 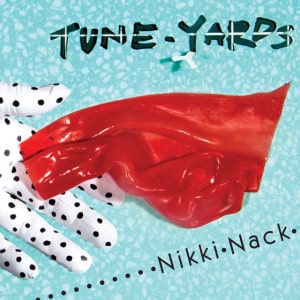 Music can do many things, but it’s at its best when it moves you. It can move your heart, move your feet or move your brain. And, on rare occasions, it can move all three. When it does that, it’s impossible not to feel like every synapse in your body is reacting to it.

As an experiment, take the fourth track on the new album by Merrill Garbus, aka tUnE-yArDs. Called Real Thing, it’s quite possibly the best thing she’s written yet, and is designed to be listened to loud through a good pair of headphones. And, if after two and a half minutes of irresistible rhythms, lyrics such as “I come from the land of slaves, let’s go Redskins, let’s go Braves” haven’t got you up and dancing, then by the time Garbus yells “Glory, glory it’s good to be me” then you should, at the very least, have a huge smile plastered over your face.

There are moments like that scattered throughout Nikki Nack, Garbus’ third record. It’s an album of dazzling imagination and startling ambition; an album that should, if there’s any justice, announce her – at last – as a major star. It almost overspills with ideas, and if some of those ideas don’t quite hit their mark (most do), it still makes for an almost impossibly exhilarating listen.

It’s intriguing to trace tUnE-yArDs’ development as an artist from her three albums so far. With BiRd-BrAiNs, we were introduced to her unique brand of lo-fi pop, and on 2011’s w h o k i l l, the kinetic energy of her live show was added to the mix. Nikki Nack is a delicious combination of the two – remaining experimental enough to remain interesting while also accentuating her much under-rated pop sensibility.

By the sounds of the material contained herein though, this wasn’t an easy album for Garbus to record. There are more than a few songs tackling the subject of inertia and writer’s block – opening track Find A New Way may sound slinky but has lyrics referencing night terrors and loneliness. The nagging Wait For A Minute opens with the arresting line of “Monday, I wake up with disgust in my head, could not forgive myself another moment spent in the bed”. It says much about Nikki Nack’s ebullient, even triumphant, atmosphere that most of these downbeat lyrics aren’t picked up on until multiple listens in.

Inspiration seems to have been found in Haiti – apparently she spent a fortnight there during the album’s recording and also studied with a Haitian performance troupe in California. Water Fountain is the most obvious product of this, a gloriously poly-rhythmic marvel that manages to use a children’s playground chant and lyrics like “jump back, jump back, Daddy shot a bear” and “a two-pound chicken tastes better with friends” to make a serious point about the lack of drinkable water around the world. Like much of Garbus’ work, there’s a social conscious behind the dancing.

The only track which doesn’t quite hit the mark is the bizarre spoken-word interlude of Why Do We Dine On The Tots, a 90 second skit which nearly threatens to disrupt the seemingly unstoppable momentum of the album so far. However, things are saved by following it with Stop That Man, which crams in so many sounds – ranging from pastoral handclaps to mind-spinningly dark and distorted grimy drum patterns – that it’s possible to hear different things in the song each time you listen to it.

As sonically marvellous as Nikki Nack is, it’s Garbus’ voice that gives it its heart and soul. Her vocals have always been pretty startling, but she’s taken it a whole new level here. Growling one minute, hollering exuberantly the next (often in the same song), she can exude more emotion and feeling in one note than any number of X Factor wannabes. To quote the possibly self-deprecating yet still truthful lyrics of Real Thing: “Oh my God, I use my lungs” – she certainly does.

At times, there seems to be almost too much to process in Nikki Nack, and it’s true that this is certainly an album that repays multiple listens and complete immersion. That immersion will pay dividends, for Merrill Garbus has produced yet another deftly thrilling listen.