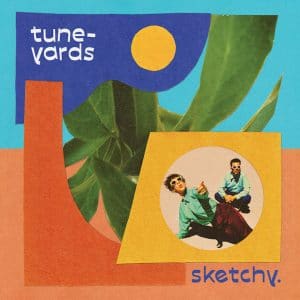 About 10 years ago, Tune-Yards could legitimately claim to be one of the most exciting acts on the planet. Their second album w h o k i l l was bursting with energy and invention, while their live act was filled with loop pedal effects, astonishing vocals and a fair bit of synchronised dancing.

Since then, Merrill Garbus and Nate Brenner have released two more albums and the score to Boots Riley’s critically acclaimed film Sorry To Bother You. While familiarity may have blunted that initial exhilarating rush, their sound has evolved into something more considered and understated – although the clattering chaos that is the Tune-Yards trademark still remains.

As ever, there are several tracks on Sketchy that will have you bouncing in your seat as soon as they start. Nowhere Man is an intricately stitched college of sounds, full of discordant percussion, infectiously bouncy rhythms and Garbus’ voice taking all sorts of impossible twists and turns. Make It Right, which follows, is less kinetic but the song’s jazzy horns give it an endearingly woozy feel.

There are plenty of surprises on Sketchy as well, not least in the album’s single Hold Yourself. Beginning like a musical version of Philip Larkin’s This Is The Verse (“parents they made us, they tried to raise us, but parents betrayed us even when they tried), it settles down into a mid-tempo, almost soulful ballad. The frantic drum loops and vocal hollering are put away, and this more reflective version of Garbus works beautifully well – even if a rather obtrusive saxophone does threaten to break the magic towards the end.

Much of Sketchy was created during improvisational jam sessions that Garbus held with Bremmer – a change from previous records, which as brilliant as they could be, sometimes sounded like they’d sprung from a programmed computer. This time round, Hypnotized has a – yes – hypnotic sway to it and My Neighbour has a slinky groove to it that may take a while to get going, but soon buries it way under the skin.

There are some moments that don’t quite work – nobody really needs a full minute-long track entitled Silence Pt 2 which is just, you guessed it, silence, while by contrast, Homewrecker sounds almost too packed full of sounds, and ends up becoming a bit grating. With Tune-Yards though, there’s always such a degree of experimentation that you take the rough with the smooth, and even the more abrasive moments are full of invention.

Tune-Yards are always going to be an acquired taste for some people, and while this album mixes the accessible with the avant-garde, there will probably be people who are left cold by the restless energy and sometimes overtly meandering melodies. There are more than enough moments on Sketchy though to show that Garbus and Bremmer can strike musical gold when they want to.