Tunng – …And Then We Saw Land 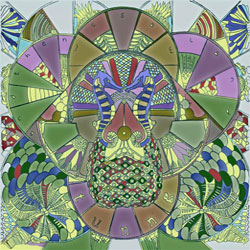 In the last few years UK folk music has been undergoing something of a renaissance. Laura Marling, Johnny Flynn and Noah And The Whale all attract fiercely loyal audiences, while Mumford And Sons have graduated from playing tiny little London venues to appearing on Late Show With David Letterman in just a couple of years.

Tunng could be seen as laying the groundwork for this success, although their experimental, electronic flourishes have always set them apart from traditional folk. Their fourth album is the first without the former leader Sam Genders – losing the main songwriter and lead singer could be the death knell for many a band, but Tunng have proved more durable than most.

Instead, Genders’ departure has seen the welcome promotion of Becky Jacobs, who takes lead vocals here along with bandmate Mike Lindsay. The result is a real evolution for Tunng, producing their most consistent and fully rounded album yet.

Opening track and first single Hustle is a lovely little hop, skip and jump of a song, featuring a delightful shuffle of an acoustic guitar loop and some perfect harmonies from Jacobs and Lindsay. Innocously addictive, it’s the sort of number you’ll slip on whenever you’re desperate for a pick-me-up.

Elsewhere, it’s as unclassifiable as ever. Although they’ve recently toured with Tinariwen, there’s no Malian desert blues on show. But there is a wider variety of sounds on offer, with even a Thin Lizzy-alike guitar solo taking pride of place on the instrumental By Dusk They Were In The City.

Mostly though, the mood is minimalist and low-key. Standout track Don’t Look Down Or Back showcases some lovely vocal interplay between the two leads before bursting gloriously into the chorus with a wonderful sense of release. The more traditional ‘English folk’ aspects of the band’s sound are highlighted by the sweetly sung October, and the fragile, brief These Winds – the latter of which is mostly acapella, which shows off Jacobs’ vocals to stunning effect.

Perhaps the most intriguing track is The Roadside. Powered along by a hypnotic guitar riff, it’s got strange, eerie lyrics about “wading naked into the water” and “sounds on the roadside”. What it’s all about is anyone’s guess, although you’ll find that you can’t stop listening to it.

There are very few weak spots – the aforementioned rock guitar in By Dusk They Were In The City seems a bit out of place – and the whole album seems to flow seamlessly, even up to the hidden track at the end. These are often used as an excuse to throw away any old rubbish, but the untitled track after Weekend Away fits in beautifully.

They may not be troubling Letterman’s stage just yet, but …And Then We Saw Land is a promising starting point in Tunng’s next chapter.