Tunng – Songs You Make At Night 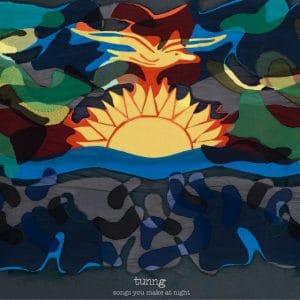 After 15 years, it’s probably fair to describe Tunng as veterans of the folktronica genre that they helped to pioneer. Although never household names, their influence can be seen in many of today’s bands, and founding member Mike Lindsay has already produced one of the year’s most intriguing records in his LUMP collaboration with Laura Marling.

For Tunng’s sixth album, the band have gone back to their roots – literally, by reuniting with original member Sam Genders. Genders has spent the last decade recording under the name Diagrams, before getting back together with Lindsay in 2016 to record the Throws album. Now the whole band are back together for the first album to feature the original Tunng line-up since 2007’s Good Arrows.

The result is a band that sounds revitalised, with some of the best songs they’ve yet recorded. Far from slipping cosily into the lazy ‘bleepy folk’ tag, they skate from genre to genre with dizzying speed. The album is bookended with two suitably dreamy tracks, Dream In and Dream Out, built on blissful synth lines and sampled cries of “Wake up” which bring to mind Kate Bush‘s introduction to Waking The Witch.

There’s more focus on Becky Jacobs’ vocals too – especially effective on the lovely Like Water, which begins with her solo vocals, before blending beautifully with Lindsay’s uncannily Guy Garvey-esque voice. Jacobs also adds another layer to Sleepwalking while her appearance in the background of Battlefront lend the song a suitably eerie chill.

Also, in a move that may surprise those who have long written off Tunng as po-faced and twee, Songs You Make At Night is their most fun album by some distance. The aforementioned ABOP is possibly their most obviously danceable track to date while Never Here steadily builds up into what can only be described as a club banger. There’s more than a nod to Metronomy too in many of the album’s tracks, sharing an glacial, icy cool with the Devon band.

Whether this will be the record that finally opens up Tunng to the big time is unclear, but that’s probably the last thing that concerns them. What’s undeniable is that Songs You Make At Night brings together the spirit and energy of early Tunng while making the best of the years of experience of its founder members. It’s a fine showcase for Tunng’s strongest set of songs in many years – happily, this seems to be one reunion that’s working out just fine.