Tunng – This Is Tunng… Live From The BBC 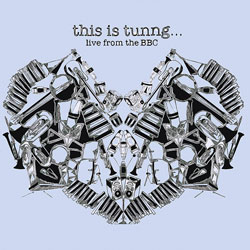 Like much of Tunng’s music, this collection of their BBC sessions has come about through a mixture of good musical instinct and improvisation. Now that Mike Lindsay and his band have been releasing albums for nearly seven years – a frankly scary thought – they deserve their compilation, though it’s typical of the band to turn that in to something freshly minted and inventive.

The intimacy of these sessions is well caught, especially on headphones, and the arrangements are sufficiently different to throw the music in to new light. The stately Take, opening proceedings, gains a number of electronic blips and glitches that complement rather than obstruct, and the unison chorus makes the listener feel like one included in the community. Hustle works extremely well too, its breezy melodies interweaving for positivity and bliss.

Before long the inimitable brand of Tunng humour comes through, the incredibly catchy Bullets managing to combine whimsy and poignant side glances, while Jenny Again keeps its slightly distracted offstage vocal. The strangely haunting elements of the band’s music are also picked up by Beautiful & Light, which begins with eerie bell-like sonorities.

With all their winsome melodies and sentiments, mind, the crowning glory of this collection is Tamatant Tilay, a fruit of the band’s still unlikely but somehow effective collaboration with Tinariwen. While it would seem right to continually scratch the head at these two appearing in the same postcode, let alone the same stage, the two bands seem to have been able to get on the same wavelength almost immediately, despite the language differences. That sense of musical discovery and chemistry comes across immediately here, with Lindsay’s sotto voce “let the blood boil” up against some more elaborate improvisation and musical wonderment from the Touareg desertmen. It proves a wonderful five minutes.

Even then, when you might expect the collection to tale off with the big guns already played, Tunng continue to surprise and delight, leaving a small lump in the throat on more than one occasion, or a wide open mouth as they reinvent the Blue Pearl rave classic Naked In The Rain. Vocally Lindsay and Becky Jacobs go together like milk and tea, and the sense of communal music making is strong but never forced. You’ll never find any references to ‘friend chips’ here.

With Lindsay’s new album, a collaboration with North Icelandic vocalists, due in early 2012, and a new Tunng album reportedly in the bag, these continue to be creative times for a band deserving of a greater prominence in our musical heritage. When you hear the body of work in these sessions, and witness at first hand the musical creativity and bond between them, it only leaves you wanting to hear more.