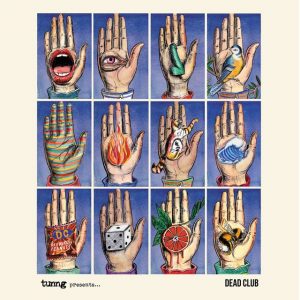 One of the funniest moments in Steve Coogan’s I’m Alan Partridge series comes after the spoof DJ has had a jovial exchange with fellow entertainer Dave Clifton. The light atmosphere suddenly turns dark as Alan begins his show with the ominous refrain, “Tonight we’re talking about death!”

It is something we surely do more often these days. Death and more specifically grief have become a more acceptable topic of conversation in culture, and have of course fuelled many artists’ best albums. Tunng have been building up to a death-themed album for a while, beginning with The Dead Club podcast series in August. Vocalist Sam Genders was the first to become immersed in the subject for some time, having read Max Porter’s novel Grief Is A Thing With Feathers and sharing it with his band mates. All six were profoundly affected, the fruits of their reading labours revealed not just on the podcasts but on this new album of striking depth, immediacy and originality.

A macabre streak has always run through Tunng’s songwriting and it comes to the fore here, along with their characteristically wry observations and welcome doses of humour. Spoken word excerpts from the podcasts are woven into the songs, with commentary from guests as varied as Derren Brown and Tinariwen’s Ibrahim Ag Alhabib, along with original words from Porter himself.

This balancing act between music and speech is ideally managed, as is the one of loss and lasting positivity. The resultant songs have fragility but are underpinned by real substance, gaining power especially when the group sing together. This appealing communal dynamic boosts Eating The Dead, an unusually lengthy opening number for the band, whose solemn chant sets a thoughtful and inward-facing mood.  Tsunami goes the other way, with lovely layered vocals in response to Becky Jacobs’ affecting solo.

Along the way there are many pertinent observations. “Death is the new sex, everybody’s talking about it,” goes the second song, while The Last Day is a hypnotic set of micro-thoughts on the significance of small actions made on the last day of a person’s life. “This could really be the last tea of your life” is one such momentous event. The wit and humour is ever-present. SDC turns out to stand for Swedish Death Cleaning, another song informed by Genders’ reading material, highlighting the unusual emotional wrangle experienced when cleaning out a loved one’s belongings. “All the toys in the shed have got to go”, sing the band with rueful determination.

A musical thread to the album means many of the songs hone in on a D – E – A – D chord progression – a strong sequence as it turns out. There are lovely instrumental touches, too, such as the Ashley Bates’ baleful clarinet on SDC or the pizzicato violins adding a touching counterpoint to Three Birds. The best is saved until last, Max Porter reciting specially written text to the mottled piano of Martin Smith, bringing us full circle to the mood of the beginning. “Someone might read your body like a book”, he reads thoughtfully.

Tunng presents Dead Club may be their darkest album to date but it is arguably their finest too. It covers all the twists and turns of grief, from unexpected humour to those sudden, poignant moments where the bottom drops out of your world. The music’s resolve ensures the band never fully dip beneath the surface, but the vulnerability is touching. To successfully balance all these elements in an album is a notable achievement, a creative peak even for a band with more than 15 years’ experience together. Dead good, in fact.