Turin Brakes – We Were Here 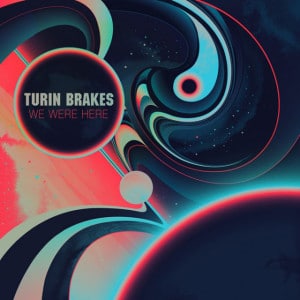 Since joining forces some 14 years ago, folk rock duo and childhood friends Olly Knights and Gale Paridjanian, otherwise known as Turin Brakes, have sold over one million records internationally. The London pair also had a UK Top 5 song with the catchy Painkiller (Summer Rain) and have so far released five well received studio albums.

Following such a long and prosperous career, it was only fitting that the band celebrated the tenth anniversary of their debut album, 2001’s The Optimist LP, by touring it in its entirety in 2011. As well as celebrating the album’s anniversary, the tour provided an opportunity to close off that particular chapter in Turin Brakes’ story, enabling them to really focus on how they would approach the next stage of their career.

The band returned to the studio in 2012 to record new material, with the intensive process – which saw them spend 18 hours a day for two weeks in legendary Welsh studio Rockfield – resulting in their sixth album, We Were Here. Unsurprisingly, considering it arrives so shortly after they revisited their debut, Turin Brakes’ return has much in common with The Optimist LP, while simultaneously covering new ground.

The similarities that do persist mainly stem from the recording process, as set out by Knights in the lead up to the album’s release: “Some records in the past have almost fallen together by luck, but this was the first since The Optimist LP where we obsessed over each element.” This attention to detail is clear from the very start of We Were Here, with opener Time And Money an infectious introduction to the intricacies of the record, one that rests heavily on its melodic chorus.

Continuing the wistful start is the title track, which revolves around its warm, comforting acoustics, as Knights sings: “In the night so long and restless I can spend my time/ in a place so cold and reckless you can lose your mind.” The melody wonders with a sense of nostalgia that echoes Crowded House at their best, while the lyrics provide the perfect accompaniment, as they dive into the depths of the human condition.

In fact, the themes of loneliness and disconnection with the world – which were also present on their Mercury Award-nominated debut – are particularly prominent throughout We Were Here, with songs such as the simple, stripped-back Part Of The World a prime example, as Knights almost yearns for acceptance. The soul-searching lyricism is given further weight by Turin Brakes’ decision to record the album live to tape.

By recording in this way, Turin Brakes manage to avoid the polished sound that has occasionally diluted some of their previous records – most notably 2007’s Dark On Fire. This is demonstrated most clearly by two standout moments, Blindsided Again and Sleeper, which both nod towards The Beatles. The former, in particular, is a stunning, sonically-charged beauty, with a striking electric guitar riff weaving throughout its near six-minute running time.

Inbetween is another highlight, with its anthemic chorus rising from the melancholic, ’70s-indebted verse, while Erase Everything is Turin Brakes in their most basic form, a desolate, acoustic number that is emotionally exhausting. However, there are also moments where things don’t go quite to plan, especially around the halfway mark. Guess You Heard sounds ill-fitting, while the meandering No Mercy is too ambient for its own good.

Ultimately, We Were Here is another strong return from Turin Brakes, one that doesn’t stray far from their acoustic niceties, but one that also seeks out a natural progression. The album’s strengths undoubtedly lie in its ability to repeatedly deliver alluring campfire melodies, but the duo also sound as though they are looking to the future. Whether that future will see them match their early success is as yet unknown, but We Were Here is a good place to start that journey.